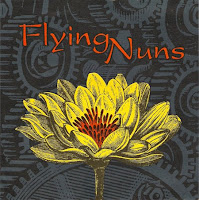 Boston's now presumably defunct Flying Nuns, didn't boast a particularly large catalog of releases, but what little was made available to the public large was more than impressive. Beginning life as a trio in 1989 in Connecticut, (and eventually become a quartet) the band emigrated to Massachusetts, and soon thereafter materialized onto the collective radar of ear-t0-the-ground indie rock enthusiasts. 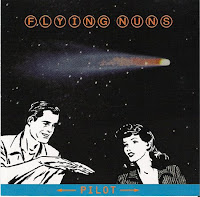 Delivering a loud, clangy, post-punk rush, cloaked in a slightly melancholy context, it was apparent that the Flying Nuns sonic inclinations were drawing significant inspiration from another set of Beantown boys done good, Mission of Burma. This comparison was further validated with FN bassist and mouthpiece Kevin Sweeney evoking Roger Miller's urgent, world-weary vocals, to a near fault at moments. Bailter Space, and to a lesser extent The Wedding Present and The Wipers also informed the bands palette. Like the aforementioned, The Flying Nuns don’t skimp on hooks, albeit they were often of the barbed variety. 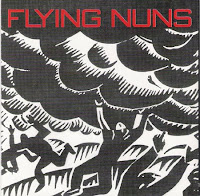 Their 1993 "Yard"/"Shirt," and the much better circulated Matador Records release, the Pilot ep in 1995, are their most gratifying records in my opinion. During their stint on Matador, The Nuns pined for greater things to come, but twas not to be, and the band was unceremoniously dropped when the burgeoning label co-opted themselves with Atlantic and Capital Records. In 1998 they released a self-titled ep that included a convincing interpretation of the Joy Division classic "Disorder." In 2002 they finally got around to releasing a bona-fide full-length, Everything’s Impossible Now These Days on Q-division records (not included in this post). You can get it as a paid download through the Nuns Myspace page, or if you want the CD version go here.

I love this band...thanks for exposing them to me