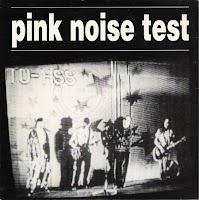 On their debut 7" L.A.'s Pink Noise Test were wet-behind-the-ears alterna-rawkers with unmistakable ambition. "Sink," which would later turn up on the Electric Train ep, ans again in rerecorded form for their lone full length, Plasticized in 1997, is an infectious slice of well manicured white noise, loosely informed by Smashing Pumpkins and shoegazer rock. A similar sonic aesthetic carries over to the flipside, "Dance," but isn't quite as effective. 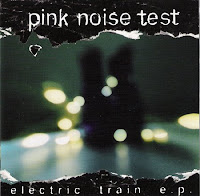 In my opinion, PNT ascended to their apex on the Electric Train ep, which is an improvement in all significant aspects. By this time, the band had ostensibly consumed a heavy diet of Jesus and Mary Chain, with the results manifesting themselves in the near-plagiaristic "All the Same to Me" and "Electric Train." Derivative as tunes stuff may be, they're downright invigorating. "Everybody's Star" briefly breaks the Pyschocandy mold, but is just as luscious as the aforementioned.


Pink Noise Test were put to pasture after their major label effort, Plasticized flopped. Retaining some of the smarts the band exuded on the ep, Plasticized found them veering in a more techno-rock direction, a la a less abrasive Nine Inch Nails.
7"
A. Sink
B. Dance
Electric Train ep
01. Sink
02. All the Same to Me
03. Electric Train
04. Everybody's Star
05. Smile

I was just listening to the Electric Train EP this afternoon. Completely agree PNT reached their apex on this release. I had the opportunity to interview the band between the TON 7" and the EP release. They totally owned up to their J&M Chain/Spiritualized/shoegaze influences, but were really nice guys. I sometimes wonder what would have evolved if they continued, but at least we have the EP to remember them by. Thanks for the trip back in time!

Any chance of a reup? Dying to get Electric Train but it's nowhere. Please and thank you!

Hey! Just wanted to see if these might get re-upped? Loving what I can find of this band on YouTube but the albums aren't available anywhere. Thanks so much!

jamesinvain I finally scored them off soulseek, lmk if you still need them