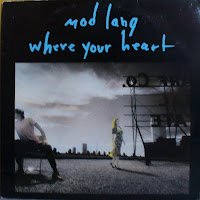 A song from this ep, specifically "Jill," has already been featured on Little Hits and The Poor Ditching Boy, but I thought I'd go to the trouble of uploading the whole deal. I'd still recommend visiting those blogs for further background info on Mod Lang. From what I understand, this was the only release Mod Lang issued under this particular moniker, as they were apparently forced to change names to Marcel Monroe.


Mitch Easter didn't have squat to do in the production or creation of Where Your Heart, but this co-ed New York trio certainly has some obvious affection for Let's Active. Assumedly taking their name from the Big Star song, Chilton and Bell didn't rub off on them as poignantly as Easter and Co. What you get are five, crisp cuts that would have fit in perfectly on college radio playlists of it's era. A great little record that I really should have posted earlier.

Could you re-up this record, please?

Hello. Would you re-up this when you get the chance? Thank you.

Holy Shit! I just waybacked LittleHits and i am now playing an mp3 file via that rroute! Cleaners From Venus! I expect this is a total anomoly not to be repeated. But still, worthy of note?
"jill" has been making me nuts all day - i put in a cd of all the Littlehits songs, and i couldn't tell who recorded this, Db's? Green Pajamas? typed in the very singular lyrics without result (suprise there) and "Jill" as search maight as well be 'girl'
would like to hear rest of the ep if you get the chance to re-up. can it be as good as 'jill'?

I don't understand why the vocal effect through the entire record. "Cheesy power pop puke"

Hi, I'm late for this, link has already expired.

Could you please re-up?