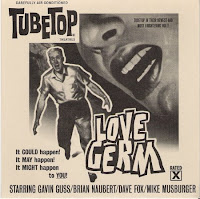 At long last I've followed up my Tubetop Three Minute Hercules post some six months ago. Please click on the hyperlink for my commentary and bio details on this criminally overlooked Posies spin-off project from the mid-90s. I said it then, and I'll say it again, Tubetop were Seattle, guitar pop wunderkinds of near-monumental proportions, and are about as gratifying as anything you're likely to hear in the "power-pop" realm. 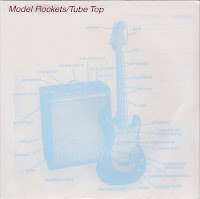 In addition to Hercules, Tubetop issued two singles of their own, and a split 7" with The Model Rockets. Tracks 1, 2, and 5 later appeared in rerecorded incarnations on Tubetop's aforementioned lone album. "Love Germ" & "Vixen," from the band's single on Laundry Room Records, are entirely exclusive to this release, and I gotta tell ya, it took me a couple years to track this piece of wax down. The sleeve of the C/Z Records single ("Bleeder" & "With You") features the band's name in a shiny, maroon veneer (mylar perhaps?), that unfortunately failed to translate from my scanner. Nevertheless, enjoy.
01. Bleeder
02. With You
03. Love Germ
04. Vizen
05. The Rules
06. World Won't Let Me (by The Model Rockets)

Thanks for these, Neal!

Thanks for the Tubetop 7"s!

I've loved that debut for years. Somewhere I think I have some kind of sampler with non-LP tracks of theirs. Not sure if they're from either 7" or not.

I missed this. Can you please re-up a link. Thanks.

Any chance for another re-up? Please. . . I just ripped my copy of Three Minute Hercules, but I've never heard these singles.