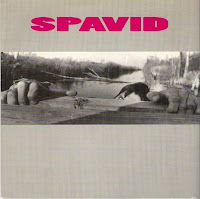 It was recently suggested that I share a single by the band I derived my intermittently employed 'handle' from. Totally logical, and even more so, a custom fit for the Singles Going Single series, given they only released one 7" in their too-brief lifespan.

If it wasn't for their brevity, locale, and minuscule discogrpahy, Buffalo, NY's Spavid may have been whispered in the same breath as fellow "post-rock" collectives as Tortoise, Gastr del Sol, and Codeine. In short, post-rock is based on the notion that "music" can still be deemed as such, while bearing little to no antecedents of traditional rock, pop, country, jazz, or even punk song structures. (The Wikipedia link above might lay this definition out more accurately than I can). Given their comparatively abrasive and brusque textures, a lot of folks lumped Spavid in with the "post-hardcore" punk set, but aesthetically the band was coming from a different angle. Groomed on the likes of Shellac, Drive Like Jehu, Bastro, and most notably, Slint, talked/shouted vox, a healthy dollop of dissonance, and startling stops and starts that could turn on a dime were this trio's calling cards. Spavid shows, were they held in a basement, somebody's loft, or more commonly on a stage, were nothing short of an assault on the senses, and it's obliterating effect would stay with you long after the band packed up their gear. 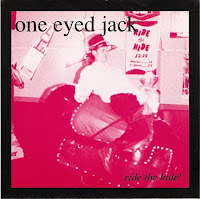 On the heels of their briskly-selling single, the band recorded an album for the now defunct Humble Records label. In 1994, they dissolved rather instantaneously after a tour that I was informed that didn’t go to everyone’s liking. Spavid's lineup featured vocalist/guitarist Mike Scully, bassist Bruce Reckann, and skinsman Jason Kourkounis. Kourkounis would soon go onto two bands of much greater prominence, Mule and The Delta 72. Scully has since relocated to Portland, OR, and is now fronting Joyland. You can bone up on Cash Cow Records, the imprint that released the Spavid single right here.


One Eyed Jack was the immediate precursor to Spavid, containing Scully and Kourkounis in it's lineup. The Ride the Hide 7" is culled from the same cloth, but in my opinion is a little more approachable given the band's rather pervasive Amphetamine Reptile-era stylings.
Spavid 7"
A. Itchy
B1. Jarneck Chump
B2. Slept
One Eyed Jack - Ride the Hide 7"
A. El Pintauro
B. The Mill
Spavid: https://www72.zippyshare.com/v/AJ1uOHaF/file.html
One Eyed Jack: https://www72.zippyshare.com/v/DZWkVlnl/file.html
Posted by spavid at 5:05 PM

Is that unreleased album floating around anywhere out there? I had a very poor quality cassette of it and it was fantastic.