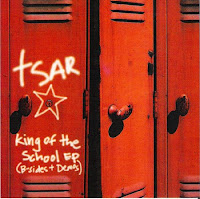 TSAR’s bitchin’ self-titled debut on Hollywood Records rocked my MONOstereo in a big way when it materialized in 2000. Like many before and after them, they suffered from a seemingly indifferent promotion team at Hollywood and made nary a dent on mainstream or college radio. Despite failing to make such crucial inroads, the album was a near-jaw dropping stunner, offering cheery, colossal hooks and amped-out guitar swaths. Think Silver Sun, or maybe Jellyfish on steroids. A little bit 'o glam doesn't do them a disservice either.

Though the aforementioned debut failed to fly off shelves, Hollyweird Records saw it fit to put out a promo ep of TSAR non-lp goodies, i.e. outtakes, demos of completely unreleased songs, and some live cuts. In addition, I’m also tacking on a quartet of live songs from this period that the band recorded for a British SBN Session (whatever that is). Don’t look at me, I live in the States. I just download this shit.

i found your blog looking for olivelawn's 1st record, sap.

is there ANY way possible that you could upload it? if you've got it, of course... i had a copied cassette of it years ago and have been itching to hear it again for a long time, aside from their 2nd cd (which i've got)

man, THANKS for putting good tunes up like olivelawn.

I think I have to ask again, exactly WHEN do you break into my house and copy some of my favorite "willfully obscure" recordings. Just recently the Fig 4 ep and now this Tsar CD ep.

By the way, you are right on about that first Tsar CD. If you like POWER in your power pop, it's one of the best.

The first Tsar CD suffered from being massively overproduced. There was a demo tape floating around prior to the band getting signed that blew away anything else they ever recorded. Someday I'll start one of these blogs and post it...

I have the demo tape somewhere and can't agree.

The demo tape was ace but the album hit it right, both are different, but the first four tracks of the album live up to anything around.

It went a bit pear shaped after that and live they were ordinary, but the album is just dandy.

SBN was the Student Broadcast Network that syndicated to Student Radio Stations until it closed in 2004.

Tsar were/are an amazing band. I always think if Cheap Trick had decided to be a glam band. The demo tape referred to in these comments has been released under the title "The Drugboy Tapes".

Both links have been fixed.

Thanks for the re-ups. I do have The Drugboy Tapes, which, as you know, is early session work, which includes all the cuts of SBN, as well as some some added cuts. I'm curious to compare the two and see if there is any difference in the duplicate demos. The EP you posted, is a release I've never found mentioned anywhere. I'm really looking forward to listening to it. In case you didn't know, TSAR put out an EP in 2012 ? entitled The Dark Stuff. Not sure if this is old or new material, but it has the sound of their first LP. In other words, it's rather good. -- I'm very late to the demo/band direction debate, but I have to side with the first LP. It's more distinctive than the second release. The demos are muddied and a bit raw, somewhat akin to the sound the band took with the new direction on their 2nd LP. Not bad, but nowhere as good as the first. -- Let me know if you're interested in either Drugboy or Dark Stuff. I'd be more than happy to reciprocate. Thanks again for the re-ups.

Please re-up both!! Thanks.

Please could you re upload?
Thanks!

Looks like this one is expired. Would greatly appreciate a re-up if possible. Thanks!!

What Phil said - pleas and thank you!

Thanks for the re-up. Iv'e been on the hunt for the debut lp (2000) and anything else from TSAR. Any chance that you might have it?

Thanks and rock on!