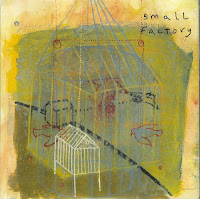 For a time in the mid-90s, Providence, RI's Small Factory were arguably the flagship band for the burgeoning "twee" indie movement. A co-ed trio, drummer Phoebe Summersquash's compatriots bassist Alan Kemp and axe-slinger Dave Auchenbach were downright tone deaf in the vocal department compared to her sweet, coo-ing pipes, yet Small Factory were quite tuneful overall. Their first album, I Do Not Love You, released on Spin Art records in 1993, was a sheer charmer, chockablock with slighty fey strummy and chiming pure-pop for the ages. Virgin Records soon caught wind of Small Factory and scooped them up onto their Vernon Yard boutique label just in time for the release of their second LP, For If You Cannot Fly. 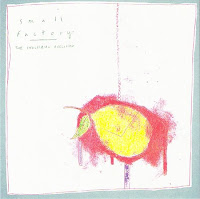 That album, sizeably more vigorous than the first, would prove to be their finale and did little to break the trio beyond their established indie-fanbase. As was the case with numerous major label casualties of the era, the band was relegated to the damaged-goods triage, broke up, and splintered off into spinoffs The Godrays and Flora Street. A nice discography can be browsed here.


As for the single that concerns this post, For If You Cannot Fly's lead-off cut, "The Last Time That We Talked" is coupled with the non-lp b-side "Movies." In fact, "Movies" is absent from Small Factory's lovingly assembled singles compilation The Industrial Evolution. Since today is Thanksgiving, I thought I'd give you an extra reason to be thankful, by sharing Industrial Evolution in it's entirety, considering it's been out of print almost as long as the singles it houses. The CD packaging includes neat little mock-ups of the 7" sleeve art for each record, that I might upload pics of later on. For now, enjoy the tunes.


A. The Last Time That We Talked
B. Movies


Vernon Yard single: http://netkups.com/?d=f1545350f69b4
The Industrial Evolution is now available on iTunes, Amazon and Emusic.
Posted by spavid at 9:55 AM

2 years later... thanks. Hadn't thought about this band since, well, 1994 and they just popped in my head for some reason. Anything I once had is long gone and I was out looking for the first album but this will do quite nicely.