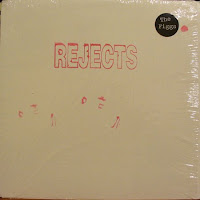 When I picked up a cassette album by The Figgs, Ginger, in 1992, I never would have guessed they'd still be an active band some 16 years later. Furthermore, I couldn't have anticipated that I'd be following them as fervently now as I did back then. While there initial batch of singles and albums, including Ready, Steady Stoned, Lo-fi At Society High, and Banda Macho, found these upstate New Yorkers at their zenith, they've nonetheless managed to pump out many, many more quality records on a fairly consistent basis. Currently whittled down to a trio of Pete Donnelly, Pete Hayes, and Mike Gent, The Figgs not only draw on all three members as talented songwriters, their sound is rooted in the likes of Elvis Costello, the Rolling Stones, and a myriad of edgy power-pop groups past and present.


The vinyl-only, and now out of print Rejects was a treat for fans fond of The Figgs halcyon era. Combining half a decades worth of (mostly) short-and-sweet outtakes, Rejects could easily pass for a proper album in itself (not counting the funny interludes and answering machine messages, as you'll soon experience). The cream of the crop here includes, but is certainly not limited to, the Stonesy stomp of "Fucks Off," the riff-roaring punk-pop of "Rollerskate," a cover of the Young Fresh Fellows "Hillbilly Drummer Girl," and "The Bar," a paean to full-blown inebriation.
01. answering machine #1
02. Rollerskate
03. What Became of It
04. Hillbilly Drummer Girl
05. Sully
06. Much to Lose
07. Barely There # 1
08. Rice Chicken commercial
09. ''Kick into da blues''
10. Fucks Off
11. The Bar
12. Getting Down With L.T.D.
13. My New Gun
14. She's Fine
15. commentary from Mike Gent
16. Barely There # 2
17. answering machine # 2 (WEQX)

great post....!
I've been wanting to hear 'Rejects' for many years. 'Fucks Off' & 'The Bar' captures all that is great about the Figgs. Word is they have another bsides disc on the way.
Hell yeah!
btw, great blog.

Love this album, love the Figgs.

Yes. These guys have been amazing for so long and they still kick ass...especially live. New album. Look for dates. Thanks!

I'm actually the uncredited saxophonist on "Barely There #2". I was in a jazz ensemble with Pete Donnelly, and he invited me to play on it.

please reup this one. Many Thanks!!

Please re-up this one and the singles collection, thank you!