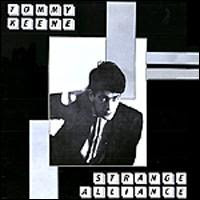 The eight-song mini-album Strange Alliance was the world's (or at least the US') introduction to Tommy Keene (formally of the D.C. based Razz) as a singer/songwriter and ultimately, jangle-rock demi-god.


From song one, "Landscape," Keene established a recipe that he would rarely deviate from on future recordings, up to and including his last studio record, Crashing the Ether. Much sought after (going for $100 on Ebay!), Strange Alliance bears an unmistakable prescience, foreshadowing a remarkably consistent career that would follow in the ensuing decades. Here are some further observations from music scribe Rob Cladwell:


Strange Alliance was originally released in 1981, and then re-released the next year with a 7" single containing the song "Back to Zero." This bonus single was a smart move, as "Back to Zero" was a big jump forward in songwriting from most of what was on the album. Strange Alliance wasn't bad by any means, but there were fewer hooks and fewer memorable songs than on future Keene releases. Basically a power pop record with a raw garage -- almost punkish -- feel, it was better than most of what was being released in the same period. Overlooked then and now, the album is by no means a classic, but is definitely worth seeking out by Keene fans and those with an interest in music akin to Jules & the Polar Bears and early Greg Kihn. by Rob Caldwell


1. Landscape
2. All the Way Around
3. Don't Get Me Wrong
4. I Can't See You Anymore
5. It's All Happening Today
6. Strange Alliance
7. Another Night at Home
8. Northern Lights
https://www34.zippyshare.com/v/Kze5tWLn/file.html
Posted by spavid at 4:37 PM

Nice up. Always been one of my favorite musicians.

wow! i had no idea that this existed! i even have named my solo outings after my favorite record, Isolation Party.

i'd also like to tell you that i was glad to see your mention of Little Hits in another posting (the bangtails, i think). that's such a great blog!

Very grateful for this! Exactly where your blog (and its ilk) prove so valuable as seems bleak this'll ever be reissued from Tommy's own apparent disinterest (some interview comments read while ago....). Been keen to hear this for ages.

One track that I thought was on here, but I guess not - "The Heart".. Recorded at same time and on the 'Connected' compilation I've got on vinyl (along with the track "Strange Alliance").

absolutely awesome l have been looking for this for 20 years after having just missed a copy in the Virgin Megastore on Oxford st l've even been to Orpheus Records in TK's home town ato look for it. So it's finally here wow. Any chance you can scan in the cover front and back on a higher res?

Tommy Keene has tried to re-issue the Strange Alliance LP with Not Lame, an indie label based out of Colorado. In fact, he was going to release a boxed set containing Strange Alliance, Songs From The Film and a disc of some demos and live material. Unfortunately, the amount the record company demanded was extremely high, considering that Tommy Keene isn't exactly a household name like U2 or Madonna.

Many thanks! You can never have too much Tommy Keene....

I've been going down memory lane talking to friends about Tommy Keane and others like him -- saw this LP on eBay and wondering whether to bite the Buy it Now ($59) or wait it out and bid and try and get it cheaper...

any chance of re upping this please

I did this LP cover decades ago for Tommy. We had no budget. It was done with presstype and zipatone patterns. Great to see this here.

Any chance of a re-up please? This is the only Keene you can't find on CD anywhere

May I get another re-up of this one, please? TIA