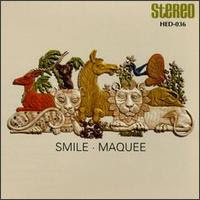 Recently had a request for this. To get caught up to speed on Smile, mosey on over to a post from late last year. Mild mannered Southern-Cali kids indulging in startlingly dynamic, slab-olicious grunge, with the occasional jarring excursion or three to keep things interesting. They were on Atlantic Recruits in '94 for about one week. Like you care. Hope ya like.

Get yourself some at: iTunes or Amazon
Posted by spavid at 5:35 PM

This band had a moderate hit on alternative radio when this record dropped. I want to say it was lemonade? I could be wrong since it was like 13 years ago.

the moderate hit was called "Staring at the Sun"...it was before U2 and The Offspring released songs with the same name.

thank you so much for this your bringing back memories the first track on the album is one of my faves.

Check out a podcast review of Smile's Maquee on the Dig Me Out Podcast: http://digmeoutpodcast.blogspot.com/

So funny you had this post about Smile. I worked at Atlantic back in those days and got to meet Mike and Co. Too bad the label deal didn't go well, we thought they rocked. Staring at the Sun got a crapload of video department play.
@robcavenagh