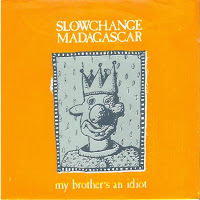 Equipped with a strange moniker, North Carolina's short-lived Slowchange Madagascar were fittingly off the beaten path, but alluring nonetheless, particularly on "Tree," a cut culled from the Pyloric Waves compilation that I've included here as a bonus. "Tree" boasted a downcast starkness so affecting that singer/guitarist Chris Clodfelter might as well have been channeling Michael Stype circa 1984. Slowchange weren't particularly jangly however, but given that so many of their predecessors had cornered that market this wasn't much of an issue. The three-song My Brothers an Idiot 7" was one of only two short-form releases to the trio's credit. Occasionally punctuated with hushed strains of trumpets (as was the case with "Tree") the wispy "Forever I Love You" is the charmer here. Makes me wish these guys had stuck around for an album or two. You can check out the other Slowchange Madagascar single here.

A. My Brother's an Idiot
B1. Commercial Pilots
B2. Foever I Love You
+ Tree (Pyloric Waves compilation D-tox Records)

Please, PLEASE upload the rest of the Pyloric Waves comp, in particular 'the bag' by Geezer Lake, I lost that comp forever ago

Will try to this up in the near future.

Please could you upload this?

I have a copy of pyloric waves if you want it.