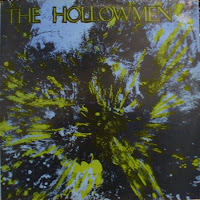 I've long been an admirer of an Iowa band named Head Candy, who released but one album, 1991's brilliant, power chord melee, Starcaster. That album (which can be downloaded from the hyperlink) is right up there with Sugar's Copper Blue. Enthralled to no end with the record, a Google query on Head Candy leadman Mark Sangster yielded a few details pertaining to his former band, The Hollowmen.


While not of much relevance to my fixation with the aforementioned Head Candy album, Sangster played guitar in the Hollowmen, but didn't contribute vocals. Nevertheless, their debut Sinister Flower Gift is prototypical Midwest, indie-guitar rock that generally splits the difference with REM and the Minneapolis trifecta, just not quite as endearing. Definitely worth a listen though. At present, I don't have The Hollowmen's follow up, the splendidly titled Pink Quartz Sun Blasting. Word on the street is that original copies of Sinister may still be available for mailorder from Pravda Records, so if you like what you hear, tell 'em Wilfully Obscure sent ya.

It would be nice if you mention that the download link for Head Candy's Starcaster is from this post {http://lost-in-tyme.ucoz.com/blog/2006-12-31-212} from Lost-In-Tyme blog, where you can also find Hollowmen's out of print "Pink Sun Quartz Blasting" LP.
Thanks

+1 Head Candy, I got to see them a few times while at Iowa (they were Iowa City-based).

Mike sang on about half the songs on this and the follow up LP. Trying to remember (I have most of their stuff on my IPod) Mike sang on Just Like You and Lost To The World (both Tom and he sing this one). He also sings most of the harmony that appears on the LP.

He sings more on the second LP. If you really want the lot, Tom has burned everything to disc, including a lot of unreleased stuff. He can be reached via tomarmstrongmusic.com.

Thanks for your feedback everyone. If only there had been a second Head Candy album...

Jim Viner, Head Candy drummer here. One of my friends sent me a link to your Hollowmen story. If you (or anyone else) wants a CD of all the unreleased Head Candy stuff you can email me at vinerjim@gmail.com

I love this record - I remember buying the original vinyl on import as a teenager when it came out. It packs a lovely balance between Husker Du-ish power pop and REM like lyrical chiming guitars. There was also a casette only release I recall which I never actually owned but heard at someones place sometime in the mid late 80's with a great song Personal Architecture on it. Great blog for a 40 year ols adolescent like me! Shaun , London

Oh and "Treeline" never was 'way too fast!'

Truly wonderful post..I also think flowers and bouquets are the best gift on such occasion !!!

Friends I want share with you some. That time of the year has rolled around once again and you’re stressing about planning the perfect birthday party. Regardless of your child’s age, almost very parent deals with the pressures and anxieties surrounding their kid’s birthday parties. Perhaps it’s because children put so much stock into this event, something they look forward to for months. After all, it only comes once a year; as well, it’s the one day where your son or daughter is able to revel in being special (via gifts, treats, cakes and often money, of course). Planning a birthday party for your child can be trying and surviving the experience is equally challenging. Fortunately there are some tips and strategies that parents can employ before the big event that will assure a rousing good time – with little stress – for all involved.
get well gifts for men

Recently I've been really getting into 80s midwest post-punk, in no small part due to this blog. Man-Sized Action & Breaking Circus are amazing, thanks for those. Then I just listened to the Full Fathom Five stuff which is also pretty great. Anyway, could you re-up this one or any more you have from these guys? And maybe some more Rifle Sport if you have it too? Keep up the good work! :)

Would be great if the Head Candy Starcaster link still worked too. Everytime I go to Lost in Tyme, I get malware warnings from my computer.