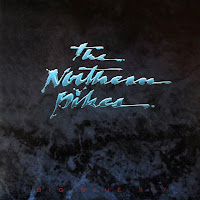 Believe it or not, I'm just as much a Johnny come lately as anyone. Maybe even more so. Were it not for a retrospective on Canadian music of the 1980s on Alan Cross' Ongoing History of New Music program four or so years ago on CFNY, this post would have been dedicated to an entirely unrelated band, one quite likely inferior to The Northern Pikes.

The 'Pikes, who kicked things off in the chilly hinterlands of Saskatchewan in the early '80s, released a pair of now impossible to find self-financed albums, The Northern Pikes in 1984, and Scene in North America a year later. By 1987, they had signed to Virgin who unfurled the quartet's major label debut, Big Blue Sky. It was this particular album that housed what would be my first encounter with the 'Pikes, the instantly enticing "Teenland." With it's wash of crisply ringing guitars and disarming themes of adolescent insecurity and escapism, it made for an irresistible introduction. As a whole, Big Blue Sky follows a similar sonic template, one that for better or worse would gradually be abandoned on future NP records. Though there are several accompanying tracks that scale near-"Teenland," heights, namely "You Sold the Farm," "Love and a Muscle" (you can explore an opposing viewpoint on this song here), and "Jackie T," many compositions are a tad underwritten, but for me that's part of BBS's collective charm (although I don't know what in the hell they were thinking on "Dancing In a Dance Club"). The strength of this album hinges more on Bryan Potvin's resplendent, chiming chords than Jay Semko's pipes, but despite the occasional songwriting deficiencies it all works out. From what I can tell, BBS was never embraced by the Audities/Not Lame community, but it's unmistakably a power-pop endeavor, which furthermore has stood the test of time.

If anyone can help me locate, or at least produce MP3s of the Pike's aforementioned scarce, early recordings, I beg of you, don't be a stranger!

Now available from Amazon Downloads and iTunes.
Posted by spavid at 11:27 AM

Hey, 80's Canadian alterna-rock obscurities are always appreciated. Being a neighbour to Saskatchewan, I'm sure I saw those early LP's but I'll have to ask around at this late stage of the game.

It is hard to think about this band without thinking of their sub-Georgia Satellites single "She Ain't Pretty She Just Looks That Way".

Not Lame guy here - BBS couldn't have been embraced by Not Lame because it came out in 1987 and NL started in '95. ;-P I was never a big fan of the band but always like all the out put I picked up of them, must say. Not Lame did carry, at one time, a really good best of compilation called "Hits and Assorted Secrets" and the reunion record "It's a Good Life" but not too many people were terribly interested in them, must say.....

I have seen and heard vinyl copies of those early EPs (I think they were EPs, not LPs), but don't own them. As far as I recall, most of the songs were earlier versions of tracks from BBS.

Also, if you've got a copy of 1988's "Secrets of the Alibi" - check out Jay's "look" on the back cover and tell me Kurt Cobain didn't inadvertantly mimic it a few years later...

A most excellent blog! Love this band, and now I love Willfully Obscure!

Now there are 6 other people in the world who love this album too. Love the Internet.

Make that eight. My husband and I are likely the only people who ever owned the first three (commercially viable) Pikes albums on CD, album and cassette. :)

I have copies of the independent releases The Northern Pikes and Scene in North America mentioned in your blog. In addition to them I also have copies of the early single by the Idols Rea jean b/w I been inside. The Idols were a pre Northern Pikes band that several of the members were in. I also have the early 45 of Let's pretend b/w Do you really want me (dead). I also have copies of the song Everyone's a Hero that the Northern Pikes did for the Canadian Special Olympics in 1991. I acquired the majority of these items from Ebay with the exception of Everyone's a hero which I obtained from Doug Chiappell of Virgin records Canada however I did see a copy of that on Ebay several years ago and I won it for $15.50 CAD. My advice to you would be to check Ebay and other sites such as GEMM and Musicstack often and cross your fingers. Everyone's a hero will be a tough one to find as only 1.000 copies were pressed and 800 or so were sent to media outlets across Canada primarily radio and tv stations. The remaining 200 were distributed among the band, their friends and families, and record company personnel. Happy Hunting and Good luck.

I have this album in blue vinyl if you would like to purchase it.

Willfully Obscure IS an understatement, as I can't find an e-mail on the site anywhere for you! LOL! Worked in the Cdn Music Industry for years, have all the Virgin Label releases, Early indie ones as well, pretty much all on MP3 now, a few other odd things, 12" dance mix of Dancing in a Dance Club (of course), single B sides, a few other obscurities (hell, even Jay Semko's Xmas Album!!) Sadly they were 4 very bright young men, all with their own ideas, views and opinions, and they seldom agreed so I think it was incredible they lasted as long as they did. They certainly were the Scene in North America up here for a while! If still wanting these, let me know. (I think only a few songs from the indie releases never really got re-recorded on the Virgin label, but if duplicated, they are diff versions!) Cheers