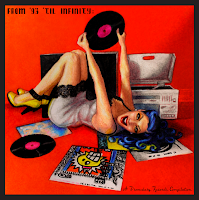 I haven’t made this proclamation public, and for that matter rarely in private, but I regard the 1990s as the last full decade which we had truly memorable music, coming at us from all directions I might add.  I’m talking about ten solid years in a row where I didn’t have to agonize about fleshing out any personal top-20 music list. Comparatively speaking, this is a minor beef in a real-world fraught with crises of macro proportions (need I make out a list?), but damn it, music was just plain more visceral in the twentieth century.

Hence the notion for someone to compile a various artists collection of current (and one recently-out-of-retirement) acts looking over their shoulder to the bygone Clinton-era for music that moved them in a similar manner.  Enter From ’93 to Infinity, a truly stimulating covers album that fits said bill perfectly.  If it’s retreads of Smashing Pumpkins and Collective Soul numbers you’re craving, I can safely advise you tootle along lil’ grunge cowboy, because this sixteen-song agenda is downright indie-centric, from the bands reworking the magic ( Stuyvesant, The Brixton Riot, and Flash Flood) to the originators themselves (Swervedriver, Archers of Loaf, and Seam), respectively.


True, there are a plethora of unknown quantities occupying From '93..., but that doesn't work to the detriment of the album, if only by virtue of it's predominantly familiar "setlist."  And it's a sweet setlist at that, featuring some bona fide indie classics, including Superchunk's rousing "Precision Auto" (The 65's), Liz Phair's iconic "Fuck and Run" (d.smithsucks), The Posies "Flavor of the Month" (Anderson Council) and Seam's "Autopilot" (Flash Flood) among a bevy of others.  The more straightforward the cover the better, and the bulk of From '93... is comprised of faithful readings, with some occasional deviations, like Cinema Cinema's unorthodox spin on PJ Harvey's "50 Ft. Queenie," which was really something of a freakshow to begin with.  As for the "out-of-retirement" participant, it's none other than New Jersey's left-off-the-dial tribe Dots Will Echo who close the whole affair out with a Mommyheads cover.

From '93 to Infinity is available directly from Dromedary Records on CD, or digitally through Bandcamp.  Below is a link to a two song sampler I've set up.

Overlake - From A Motel 6
d smith - Fuck and Run

No apostrophe in Dots Will Echo. And I don't think he ever retired. I've been getting emails about shows in tiny clubs in New York and bookstores in Northern New Jersey every once in awhile for years and years.

Well, since I inhabit western NY, I guess I'm not always in the know about these things. I hope you're able to attend some of those intimate gigs. Thanks for the heads up.

Didn't go to nearly enough of them. Of course.

And I found out only recently there was a Dots Will Echo double album that came out last May. On Bandcamp. They find new ways to make me feel like a terrible fan.