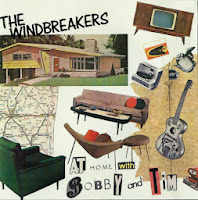 Here's a group I haven't written about in eons.  The Windbreakers were one of several bands arising from "The New South" indie/jangle-pop scene in the mid-80s. Like many of their cohorts, including REM, Game Theory, and Oh-OK, The Windbreakers were taken under the wing of producer and Let's Active leadman Mitch Easter. The core Windbreakers lineup consisted of Tim Lee and Bobby Sutliff, both talented singer/songwriters who followed solo pursuits, and eventually became power-pop demigods in their own rite.

At Home With... was the 'breakers fourth proper album, which saw the return of Bobby Sutliff, who struck out on his own after the group's second LP, Run.  Compared to the duo's earlier endeavors it's fairly polished and less than immediate, but rewarding on repeat listens.  One saving grace the CD incarnation of At Home With... has over it's vinyl counterpart is the bonus-ization of the Windbreakers demonstrably more visceral debut full length, Terminal.  A brilliant way to pad out the disk, and worth the price of admission alone.  If you're new to this national treasure hailing from Mississippi, a "best of" type compilation thing, Time Machine is available on Amazon and iTunes, making an excellent case for this band.

Hi there, I just discovered your blog and am thoroughly enjoying reading. I have added you to my blogroll as I think we may be kindred musical spirits! Could you return the favour? http://polyvinylcraftsmen.blogspot.co.uk/

Highly, highly recommended. That first Windbreakers LP (Terminal) when I bought it years later LITERALLY helped me get through an extremely challenging time. Check out "New Red Shoes" and "All That Sfuff". And the later LP At Home with Bobby and Tim is probably the better overall LP with "Our Little War" an on target relationship song.

On all these and his solo LP's Bobby Sutliff adds great and appropriate guitar sounds (riffs, solos, little accents). Although not flash, in terms of beneficial contributions to recordings he's one of the best I have ever heard.

great stuff...agreed about "Terminal'...a great lp and varied songs make it a must have for jangly pop fans.....I've designed a few cd's for Bobby over the years and he's a top fellow, and was glad to hear he was recovering from his recent auto accident......thanks much!

Thanks for your comments. Yeah, parts of Terminal strike me as album to partake in when you're going through a recovery. Plenty of dark hues abound, but also uplifting.

Been worried about Bobby ever since I learned of his accident. Fingers crossed he'll be making music again.