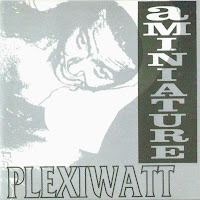 Ever since namedropping them a few night ago I've had this kinetic San Diego troupe on the brain.  Thing is, they didn't sound particularly kinetic until they hit their stride on their 1993 mini-masterpiece Depthfiveratesix.  It was on that record that aMINIATURE proved their dextrous knack for melding math-rock dissonance with emotive hooks.  For better or worse, everyone has to start somewhere, and for this bunch that spelled a thing called Plexiwatt, which I'm offering today.  It's a formative debut for sure, and though I regard it as fairly nondescript, aMINIATURE were at the very least laying down some sweet guitar tones here and there.  Plexiwatt was initially released on the micro-indie Scheming Intelligentsia in '91, but reissued on Restless on the heels of the band's relatively successful Depthfive... and 1995's Murk Time Cruiser.   You can check out a couple of split singles with aMINIATURE and locals Drip Tank here.

could you please reupload this album?
also, do you have their second album Depth Five Rate Six?

Can you re up this please? Thanks!