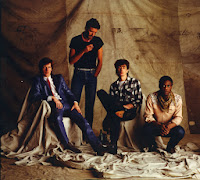 Never the edgiest of the power-pop clique, The Sinceros modus operandi made for a smooth-as-silk proposition for Top 40 playlists, but the mainstream wouldn't have them, at least not in the States. So far as I'm concerned they were too good for the masses.  During their lifespan this quartet of Londoners managed to churn out two exemplary, sophisticated pop LPs, 1979's The Sound of Sunbathing and Pet Rock in '81, both of which have been reissued fairly recently.  What I'm presenting today are about two dozen demos of mostly unreleased material, presented chronologically, tracing the Sinceros stylistic inclinations.

Judging by the first set of demos they cut in 1978, the quartet had a serious jones for early Hall & Oates, exuding blue-eyed soul maneuvers galore.  Far more memorable are the second batch of tunes, the Pathway and Matrix demos, which present the phase of the Sinceros that most fans are endeared to.  Several of those tracks including "Take Me to Your Leader" and "Little White" were recut for ...Sunbathing.  Next up are two tracks from 2nd Debut, which was something of a confusing reconfiguration of Pet Rock material that surfaced briefly overseas but was soon recalled.  It was re-released in it's entirety as bonus material for the Pet Rock CD reissue.

This assemblage of demonstration recordings rounds out with almost an albums worth of unreleased material, presumably cut post-Pet Rock in 1981, the bulk of which features a different vocalist than original frontman Mark Kjeldsen.  For better or worse, these recordings find the band trading in their last vestiges of power-pop/wave tendencies for something that I would charitably describe as more middle of the road.  Kjeldsen has since passed away.  A thorough Sinceros bio and discography can be accessed here.  Enjoy.

Wow, another killer-diller. This is really fun stuff. Loved the Scene and Take me to your leader especially.

Hi from France
Die hard fan of the band, i was happy to find thoses demo, unfortunately, links dead :(

Thanks a lot
Phil for Sucrepop