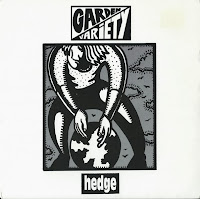 I haven't said it often enough on here, but Garden Variety were responsible for the grandest sound to ever emanate from everyone's favorite sand bar, Long Island, NY.  Despite a relatively minute discography (two albums, this ep and several split singles) this Valley Stream trio managed to lodge themselves into my personal top-ten favorite artists of the '90s - perhaps even the top-five.

Garden Variety's wailing maelstrom distilled the most crucial components of early Soul Asylum, Superchunk, and Rites of Spring, all couched in a tuneful, post-hardcore delivery system that rarely, if ever relented in intensity.  The three song Hedge ep was their premiere release, and although GV's closing act, 1995's Knocking the Skill Level was more sophisticated on virtually all fronts, they were white-hot from minute one.  In strenuously adenoidal fashion, mouthpiece Anthony Roman (who later fronted Radio 4) boasted a set of pipes that intoned something poignant about the human condition, while Anthony Rizzo's guitar salvos were clangy, crunchy, and LOUD to a fault.  Joe Gorelick (later of Retisonic) dealt a frenetic, as-if-his-life-depended-on-it hammering to the skins.

As for the Hedge ep itself, I had a slight moral dilemma about sharing it, as all three songs were appended to the CD edition of GV's first album.  In the end I couldn't resist, given the fact that I actually own the vinyl incarnation of it which this rip was derived from.  Plus, there's the unique circumstance of this record being the only one in their catalog equipped with a lyric sheet - something their two albums desperately called for.  Anyway, if you dig what you hear please consider buying the self-titled Garden Variety album from iTunes or Amazon.  It's a scorcher.  You can check out Knocking the Skill Level via the link above.

These guys were excellent. Both albums are fantastic, but I really recommend the split with Chune, who were an amazing emo-ish San Diego band who disappeared into obscurity. Long island spit out some amazing bands during that time - GV, 1.6 Band, Silent Majority, Dahlia Seed.

Do you perhaps have their s/t record? :)

Hello! Can you upload Retisonic releases Lean Beat and Rerurn To Me?!

Hey guys! I'm friends with Joe and you should all know that the discography (and extra goodies) is going to be released sometime in the near-ish future. They managed to get a friend to rescue the tapes for Knocking The Skill Level from the dumpster, essentially, and it's gonna be amazing. If you haven't already, check out Joe's other band Red Hare who are gearing up again, too!