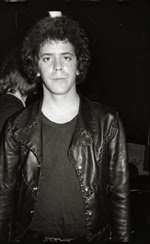 I didn't want to jump the gun two weeks ago when Lou Reed's death was announced, and rush something onto these pages for the sake of it.  Here's the straight dope.  I have way more invested in Reed/The Velvets than your average man on the street.  I own the Peel Slowly and See box set, and a couple of the VU double disk reissues of individual albums.  Admittedly, my collection is sorely lacking Reeds solo efforts, but in my own way I've followed him from album to album, at least during the last three decades.  Much like the Beatles, Clash, and Joy Division, The Velvet Underground were frankly overrated and shamelessly over-exploited by their respective record labels.  Yet all of the aforementioned produced an undeniably respectable body of work.  Reed and his revolving cast of cohorts may have beaten everyone else in the proto-punk sweepstakes, but the originators of a genre (or sub-genre) don't necessarily represent it's apex.  See where I'm coming from?

Nonetheless, I feel the need to pay homage, if only because, as the fabled adage goes (greatly paraphrased), not many people picked up a Velvets record contemporary to when it was released, but everyone who did was inspired to start a band.  I'm an awfully big fan of a lot of those bands, and that alone is sufficient reward.

As you can imagine, a lot of people have been coming out of the woodwork of late, offering live Lou Reed shows, including this Buffalo, NY performance originating from 1973.  A soundboard recording, but a deficient one at that, with the guitars buried way down deep in the mix.  Just as frustratingly, "Satellite of Love" fades out not long after the two-minute mark.  As for the man himself, Reed sounds noticeably tipsy on this particular evening, but not enough to blemish the performance.  Ten songs that roughly split the difference between his solo endeavors and VU, including a 21-minute rendering of "Sister Ray."  I'm offering two download options, lossless FLAC, and 320 kbps MP3.  Have at it.

Maybe in our day and age the Velvets are over rated, I don't think so, but take it back to the 80's and nobody had ever heard of them, besides aging weirdo new yorkers

Been reading your blog for a long time and never felt the need to comment until now. As someone who discovered the Velvets via Bowie and DJ Johnny Walker c. 1972. saw Lou on the Rock and Roll Animal tour and all the individual Velvets subsequently, as someone who bought every solo album they all made up until the mid-80s and finally as someone who took Reed and Cale as primary inspiration when forming a punk band in 1976, I'd have to say I think if anything they are still underrated.

ooooh! This was worth the wait! Thanks!

I couldn't agree more. It's really refreshing to hear someone else differentiate between "I like this" and "This is good". I really like the Velvets too, but that doesn't mean that the hype surrounding them is warranted.