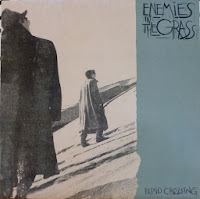 Happy Thanksgiving.  With that out of the way, this isn't nearly as big an unveiling as last nights Jellyfish box, but New York's Enemies in the Grass were coming from the same place.  Quintessential power pop along the lines of Tommy Keene wasn't an easy sell come the early '90s, and situating themselves on a small time indie imprint probably didn't help matters (though the Enemies were in good company on Galt).  The 1988 "Day After Day" 45 is truly the best of both whirls.  Surprisingly, the A-side wasn't the Badfinger tune, while the flip, "Out of Luck" sports an indelible shade of Merseybeat.  Great.  The Blind Crossing ep followed three years later, featuring re-recordings of those two songs that are almost identical to the single.  We're also treated to the psych-kissed "Wants It That Way," and the chiming "Best Behavior."  As instrumentals go, "Kind of Girl" is enjoyable, but had it been adorned with some text, it would have been just as much of a keeper as the aforementioned.  Enjoy (or not). 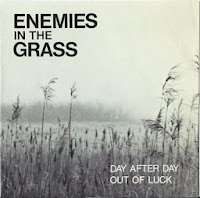 Thanks a lot for both the 7" and the EP.
Great songs which are so evocative of a time when jangle pop yielded such nice yet confidential records.

The name does not ring a bell. With your endorsement and that of Philippe in the comments, I can't wait to hear it.

They better be good to dare name a s song "Day After Day"!

Thanks for this giving,

Could you upload the file again? :)