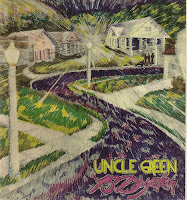 Since I have this record on loan from somebody, I thought now would be an apt time to share it. My familiarity with Uncle Green was, and largely is, fairly minimal. Formed in New Jersery in 1980, the band eventually hightailed it down to Atlanta, GA, where they would eventually hook up with DB Records for their second album, 15 Dryden. They signed with Atlantic in the early '90s for their most well known record, Book of Bad Thoughts. After a fruitless decade and a half of chasing success, Uncle Green rechristened themselves 3 Lb Thrill, and by 1995 released Vulture on Sony Records to a sizably larger and more attentive audience.


15 Dryden is chockablock with sweet, strummy guitar pop, leaning in the direction of Crowded House, as well as the "new south" sound that I've mentioned many times on these pages before. The online version of Trouser Press has a few things to say about Uncle Green, as does Allmusic. There's pops and snaps galore here, but I did my best to minimize the nasty little buggers (without much success unfortunately).
01. Make Someone Happy
02. Complicated
03. That Must be the Way
04. Bad Dream #4
05. Red Tape
06. Another Disappointment
07. It's All Coming Back
08. Looking for the Words to Say
09. Washday
10. Brute Force

Thanks so much! I loved Uncle Green!

Uncle Green were really brilliant & one of the classic bands that should've made much bigger waves at the time. You should ask your friend for a rip of the even harder to find debut, "Get It Together"! Thx for this post either way :)

Living in Atlanta when these guys were on their game. Enjoyed every time I caught them live and prefer the recording "You" that came out just before signing to a major.

I'm afraid this is all I have by Uncle Green, but would be interested in hearing You. Thanks MFP!

Wish granted (albeit a little late)...

A) Thanks to all of you for the kind words. It means a lot!

I played trumpet on at least one, maybe two, tracks on this album. I had forgotten about it until someone sent me a link to a video they made for the first song (https://youtu.be/10M5XVKWKo4) - I played on this track. I saw them a few times playing at parties at Emory University circa 1986-1988. Super live band - tons of fun - great songs.

Love these guys! Been looking for this for years. Can you upload again?