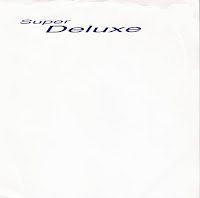 Super Deluxe were yet another sad case of major label neglect that transpired during the '90s. A pop band at their core, these Seattle denizens came equipped with a whopping arsenal of power (a la hometown-mates The Posies) and yielded two consistent and highly recommendable albums, Famous in 1996, and Via Satellite the year following, during their tenure on WB subsidiary Revolution Records. This preceding single featured on side-A, Famous' opening track, "Lizadrin." Clocking in at a mere two minutes and some change, this inexplicably named song doesn't waste a nanosecond, brimming with an overpowering surge of harmonies and a gale force charge of ringing power chords that could easily prop up a lesser band's entire album. Super Deluxe had a plethora of great songs to offer (many of which remain unreleased), but to these ears they never quite managed to top this 'perfect ten.' The b-side, "Wilted and Faded" never made it to any of their albums.

A. Lizardin
B. Wilted and Faded

Thanks for another fine addition to a strong selection of indie singles found here, may this blog keep going on and on.

Love these guys. I don't know where I got these originally but I posted a collection of unreleased demos and B-Sides a while ago.

"Wilted and Faded" was among a number of great tracks. I always look forward to your posts!