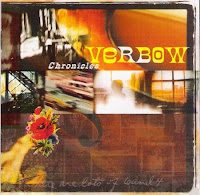 Want a recipe for a killer album? Whip out your metaphorical mixing bowl and combine the following ingredients:


-Two cups of Sugar (as in the Bob Mould variety)
-Two eggs worth of melodic sensibility
-Three tablespoons of sizzling, 90s-era indie guitar rock like Monsterland, Pollyanna, and the like.
-A pinch of cello for taste


Crank the oven to "11," bake for 37 minutes. Let cool. Yields eleven irresistible slices!
So what in the hell am I talking about? None other than Chicago's neglected Verbow, who's debut album, Chronicles, happens to have Bob Mould's recording credits all over it. The Sugar comparisons are inevitable and fairly dead on, but Verbow don't exude quite the lead-foot on the distortion pedals, balancing out full-tilt rockers like "River Wish" and "The Chronicles of Agent Kidd," with the more subdued "Man in Mile High" and "The Distance Between Us." Verbow expired in the early '00s after their second album "White Out" failed to catch fire. You can read up a little more on the band at Bill's Music Forum.
01. Fan Club
02. The Chronicles of Agent Kidd
03. Man in the Mile High
04. Execution of a Jester
05. River Wish
06. Holiday
07. Lethergy's Crown
08. The Distance Between Us
09. Sugarcone
10. Slumbering Blue
11. Down the Gun
https://www91.zippyshare.com/v/jnKhpIXf/file.html
Posted by spavid at 5:51 PM

Before they were Verbow, Jason Narducy and Alison Chesney made an acoustic guitar/cello duo record as Jason & Alison. Jason really indulges his Mould jones on that one, and Bob wasn't involved yet.

Forgot to mention that in my write up. Thanks.

Oh yeah...a terrific album which I posted some comments on here:

They're playing a one-off here in Chicago this coming Saturday night, May 15th @ Schubas Tavern.

Could you re-upload this one please :0)

Any chance of a re-up on this one? I have the album somewhere, but can't find it. Thank you. Wonderful site, by the way.