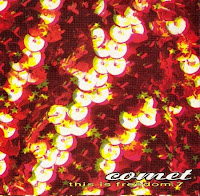 For those of you familiar with the Mesquite, TX-based Comet, you likely caught wind of them via their underappreciated Chandelier Musings album, way back in 1996. They never really caught a break commercially speaking, while a lot of critics at the time were wont to cast them off as shoegazer-esque, Mercury Rev proteges. I suppose it didn't help that their one and only album was produced by ex-Rev alum David Baker. While their billowy and feedback-drenched soundscapes were ostensibly too lofty for an impatient mainstream audience, Comet built up a modest but appreciative local following. The two-song This is Freedom 7" was a dandy precursor to Musings, featuring the exclusive a-side, "Portrait," and an early incarnation of "Rocket Flare." A.V. Club had the following to opine on the band:


Considering how little time it's been in existence, the Texas band Comet has drawn 1) a lot of praise, and 2) a lot of comparisons to elegant, slow-moving pop bands like Low and Bedhead. The first response is the only one that's justified. Chandelier Musings, Comet's full-length debut, was produced by former Mercury Rev frontman (and current Shady mastermind) David Baker, and you can tell: Where Low uses clean and beautiful guitar tones to produce a spare, delicate sound—and where Bedhead uses layers of guitars to work soothing magic—Comet creates for itself a hazy, pretty, meandering, slightly psychedelic pop sound that most closely resembles a cross between the Velvet Underground and Baker's softest works. All comparisons aside, this is warm, pretty stuff that's slow-paced, but compelling. It rarely leaps out and grabs you, but it's got a subliminal, hypnotic, head-bobbing effect that lets it grow on you more and more with each excursion.


There's some pesky vinyl noise populating these grooves, so I may attempt to clean it up and repost in better fidelity at a later date. Nevertheless, you'll get the gist as is.

A. Portrait
B. Rocket Flare

Any chance for a re-up on this? I don't have the vinyl rip equipment.

My buddy's band played first on this night and boy am I happy they landed on the bill.