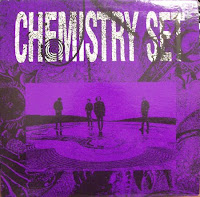 These two records just go to show how much difference a year and the prevailing music trend of the day can make. Chemistry Set were a Seattle quartet who's only claim to fame was their inclusion on the rather well-known Sub Pop 200 compilation album. If you have that record, you might be familiar with their contribution, "Underground," but if you were anything like me back in 1991 when it got reissued on CD, I was just stoked to have more Nirvana and Green River to jam out to, but I digress. The only biographical data I was able to unearth on Chemistry Set was this Google translation of a German Wiki-ish article that goes into their background and these records. Not terribly in depth mind you, but what it does cover is interesting. 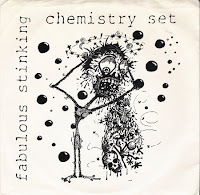 On their self-titled six-song debut ep, it would seem that Chemistry Set were cutting their teeth on a myriad of respectable American '80s bands like Translator, Red Rockers, Rain Parade, and to a lesser extent the venerable REM. Chemistry Set made for a dandy first impression. Just a year later (1989) take a guess at what stylish, pacific northwest bandwagon the band were more than willing to hitch a ride on? Yep, that one. Though not quite as down and dirty as Mudhoney, Tad and the like, the transformation was profoundly evident on the succeeding 7" single, dubbed Fabulous Stinking. Part of this "progression" was also likely due in part to a new guitarist I might add. Apparently all was not well in Grunge-opolis, and shortly after the 45 hit shelves the band folded. Singer Scott Sutherland would go on to work with Rusty Willoughby of Pure Joy/Flop renown.
s/t ep
01. Fields
02. Beneath the Plow
03. Blind Caroline
04. Hall of Mirrors
05. Kill the Sleepers
06. April Fools
Fabulous Stinking 7"
A. Look Over Your Shoulder
B. Failure
Grab 'em both here.
Posted by spavid at 6:02 PM

I bought the 7" back when it came out and have always liked it, but I never knew they had an earlier EP...

Ive been looking for this ep since around 1995. Thank you so much for posting it.

Almost a year after it was posted but it's still there and i'm a happy camper. Had the 6 song EP years ago but lost it in a fire. It had been so long since I'd heard it that I couldn't remember what it sounded like but as soon as it started playing it all came back to me. "Kill The Sleepers" is worth the price of admission for sure.

...and in a decent bit rate. I forgot to mention that. Thanks again!

Wow, thanks! For saving the trouble of digging out my vinyl and ripping it myself. Loved this when it came out, haven't heard it in years.

Aha! And there we go. Well done, well done. {in reference to my comment on the flop post}

Is it possible to make a re-up of these files? I'd be thankful!

love this thank you

I bought the Fabulous Stinking 7" at Vinyl Ink in DC in the early 90s and always wondered what this band was up to. I get the B side in my head all the time. The A side is not to my liking, but I really really like the B side.

Knowing nothing about this band, I picked up their EP at a Goodwill near Berkeley. Cleaned it up and gave it a spin. Love it.

Why isn't Orjan Lovoll included in this article at all? He was an AMAZING voice for the band and a huge influence on the seattle music scene during this time. I really wish the band's full list of names had been released.

The link is dead, can you reupload it please?
PD: Great post