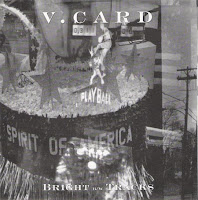 Thought this would be an appropriate follow-up to my Nub 7" from last night. V. Card had a short run of releases one of the more enlightening and prolific punk labels of the ‘90s, Allied Records. A nary spoken of trio from Allston, MA, V. Card rocked out like the orphan offspring of Husker Du and Pegboy (might as well throw in home-staters Moving Targets too). Eminently powerful, pile-driving riff rock with a colossal bite to it, and remarkably consistent at that. These guys really spat in the face of all the cookie-cutter schlock that was coming down the pike from Epitaph Records and the like. Completely ignored from what I can tell, which is unfortunate. My only complaint about V. Card was that they weren't ones for variety. In addition to their Allied 45, I'm also including a link to their following release, the Pool Shark cd ep. It closes out with an unlisted cover of INXS' "Don't Change." BTW, the tray card to Pool Shark lists a song called "Bag Lady" that doesn't actually materialize on the cd. 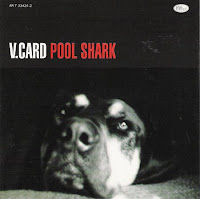 Al Quint used to write about V Card every so often in Suburban Voice, and yeah from what I can tell they were like Moving Targets (I think they were on a compilation that I owned once) but I never actually listened to them.

It's pretty easy to think that bands from back then were completely ignored because hardly anyone read fanzines, and there were no blogs or anything else like that. If people read more fanzines in the '80s and '90s they would've heard about this stuff.

i always really liked these guys, getting into them through fanzines and from following allied record releases. i think the drummer was previously in the hardcore band up front.

they also have another cdep (i forget the name now) and a full length, both on allied. and a couple more compilation tracks.

Come to think of it, I recall them being written up in Suburban Voice around the time this came out. I may get to their full length later.

Thanks for the kind words. It's always funny when your old band gets a write up. And yes, how different things were then when it came to promoting and getting the word out. Anyway - our final release was a full length on Allied called "There's You..." Maybe someday I'll zip it up make it available to anyone that cares. Both the bass player and myself still play together in a band called Capital Radio (Boston). Find us on myspace/facebook.

Hey Tim. Thanks for commenting. Will check out Capital Radio, and would love to hear that unreleased LP you mentioned.

I am amazed an honored that anyone remembers or bothers to write a word about us. Ah..the good old days...
Ving
Guitar/Vocals
V.Card

I bought Pool Shark at a V.Card show at the Evil Sister Saloon in Bend, Oregon. I have no idea when it was though, '96 would be my guess. I loved the show, the band was great and I fire up the CD from time to time. Definitely one of the gems from that time in my life.