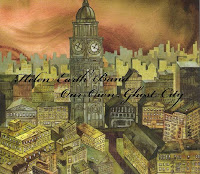 As far as current music goes, a lot of you might guess that I'm not exactly in the tank with junior high pop-punk bands, screamy nu-metal schlock, or for that matter, the Kool-Aid that online 'tastemakers' are so willing to gush out like a raging kegger on a daily basis. Fortunately there are still a plethora of bands of significant merit that manage to fly under the radar. San Diego's Helen Earth Band just so happen to fall under that life-affirming realm.


For the uninitiated, if you had to sweat down Helen Earth Band’s single most prominent facet, it would clearly be brothers Marc and Adam Allen’s, choppy, metronome precise guitar licks that sweetly deflect off one other to utterly gratifying effect. Very much in league with hometown post-hardcore predecessors like No Knife and aMINIATURE, Helen Earth band sport an agile sense of dynamics and mildly dissonant rhythms that can, and often do, stop and start on a dime. Speaking of dimes, Helen Earth Band fully funded their thirteen song debut, Our Own Ghost City on their own coin, however their studio acumen might lead you to believe they had some rock star engineer tweaking the knobs. Not a chance - Ghost City is an entirely inside job.
There’s an inherent technical slant coursing it’s way through this album, though it’s dexterous and savvy exterior belies some seriously tuneful maneuvers and sonic wanderlust. In a nutshell what you have here is a solid dose of smart, textured rock, sans the self-importance and ennui. You can stream the full album on their bandcamp page, and even lay down a few bills for your own CD.
Posted by spavid at 4:31 PM

It is glad to see this blog, it is good and detailed fun to read this, nice informative blog, Thanks for share this article.