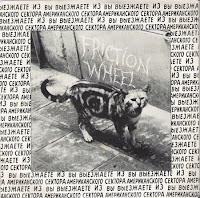 Friction Wheel were a quartet of collegiate, New Jersey popmeisters who had the good fortune of having their 45 issued on Bob Mould's short lived Singles Only Label. Served up here are two tasty slices of polished guitar pop, leaning in the direction of REM and Material Issue. Constant Listener fanzine had this to say about the record.


Speaking of Big Bob Mould, one of the smartest thing s
he did (second only to ditching the Flying-V and that dumpy
drummer of his) was sign up FRICTION WHEEL, a college-age
combo that hangs out at Maxwells a lot (even though none of
them lives in Hoboken, I guarantee you'll see them called a
"Hoboken Band" all over the place) . Their vinyl debut is
a SOL single, "Something Tells Me" b/w "Won't Fall Down."
Hard to believe that a year ago, everybody said these boys
would never get anywhere 'cos they sounded too much like
R .E .M. Today, you'd get a quick kick in the butt from
anyone with any brains who heard that remark; sure, they've
still got Rickenbacker guitars, but the twang has been
replaced by a good beefy drone and post-Husker guitar
wallop (thanks agin', Bob) and Willie Lopez' from-the-heart
vocals really put this one over the top . Nice to know I can still pick 'em .
I believe the same Friction Wheel later released an ep called Happy, which I have yet to hear. Just FYI, for those of you who opt to download this, that unsightly stain depicted on the scan of the back sleeve was not my doing, as this record was obtained used.

A. Something Tells Me
B. Won't Fall Down