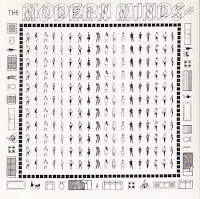 I've been so dazzled over the years by Moe Berg's work with the The Pursuit of Happiness that I did some research awhile ago and learned that he had his roots in a couple other bands before he shuffled off to Toronto in the mid '80s to inform the world at large that he was an adult (now). One of these precursor groups was a punk-ish trio called The Modern Minds who got their start in the late '70s up in Edmonton, Alberta. During their lifespan, they released all but one three-song single, "Theresa's World." Believe it or not, some eight years before unleashing TPOH's classic Love Junk, Moe Berg was penning incessantly catchy songs on par with that album. In fact, the faint background harmonies on "Theresa's World" were merely a sign of the excellence that was to come later in the decade. There are some other moments here that are just as rewarding, including "It's Gone" (another single track) and "Go," although the source tape the material on this compilation CD comes from sounds a little reedy at times. Modern Minds, released on the Japanese Base Records label, contains all three cuts from the single, and I'm assuming the remaining eight are unreleased. My only beef is that Moe's liner notes are presented entirely in Japanese. Copies of the CD may still be available from Base's website, but unless you're fluent in the language, better hire yourself a translator. BTW, Little Hit's blog did a piece on the Modern Minds single a few years ago that's worth checking out (scroll all the way down).


As for another of Moe Bergs earlier endeavors, there was also Facecrime, who to my knowledge released an exceedingly scarce 12" ep, Sex and Revolution (anyone got this?) and also appeared on the It Came From Inner Space compilation. Don't forget, I'm also sharing TPOH's debut indie ep, I'm an Adult Now.
01. Theresa's World
02. Go
03. It's Gone
04. Bungalow Rock
05. Book of Life
06. Tonight in My Room
07. Where I Live
08. 20 Years Old
09. Girl Crazy
10. Dirty Movies
11. Someone Like You
https://www75.zippyshare.com/v/a5Pj7Nu5/file.html
Posted by spavid at 6:31 PM

I was really pumped to find super rare meices singles here on your site. I've been listening to them since around '93, right around when Tastes Like Chicken era. of course i went back a got greatest bible stories and was even fortunate enough to score the alex b/w crash 7" from some dude. But i'm having difficulties with this .rar thing. What do i do once it's been downloaded, the file containg the music, i mean. thank you, Dave

You will need either Winrar or Winzip to unzip .rar files. Do a search for them on Yahoo or Google and download links for either/or should come right up.

Good find, good post (and thanks for the shout-out!)

I have the facecrime ep right beside me, but do not have a way to digitize it for you. I have a friend (surprise!) who has a USB turntable, and will see what I can do in the future. If I get it done, I'll forward the four tracks to you. Donald

Thanks fervor! Would really appreciate it. You can contact me via email, which is included in my profile.

This is why I love the Internet.

hi! please can you re upload this file? that would be great!
razor

Excellent stuff! Many thanks.

Hello from Moe Berg's hometown of St. Albert. Could you please repost as I would love to hear these songs. I had the opportunity to meet Moe and he is pretty cool. Many thanks!!