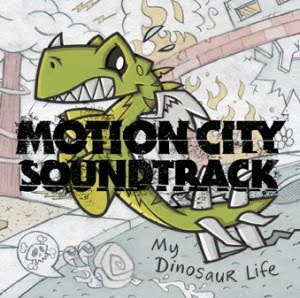 Thought I would spill some verbiage on a current release of note, My Dinosaur Life, the fourth long player from Minneapolis' Motion City Soundtrack. To those of you who took my Top albums of the '00s list to heart, you may have noticed that I tabulated all three of the band's previous albums (I Am the Movie (2003), Commit This to Memory (2005), and Even If It Kills Me (2007) in the top 50. No joke. They impressed me that damn much. Quite atypical for a slot on the Epitaph Records roster, MCS offered a dizzying conglomeration of slamming power-pop riffs, wonky Moog synthesizers, and Justin Pierre's endearingly neurotic, pseudo-autobiographical dissertations. But as early reviews of My Dinosaur Life began to enter the slipstream, I was introduced to the notion that some hardcore MCS fans deemed the quintet's last album, Even If It Kills Me, to be too "pop" for it's own good. Hmm. Granted, that album was a wee bit less frantic than it's 2005 predecessor, they had hardly gone softball. As for this album, I have a difficult time surmising what the reaction will be. My overall conclusion is that Dinosaur plays to the advantages MCS's entire Epitaph catalog, particularly Commit This to Memory and Even If It Kills Me.
The only obvious sonic gamble here is the diminishment of the band's telltale keyboards, that I imagine Andy Wallace, in all his infinite wisdom, buried deep into the mix to emphasize the more abrasive undercurrent that's been the foundation for most of their music, and nowhere is that more evident than on "Disappear." On their darkest album cut to date, the overarching theme of this rapid-fire salvo of oblique and disparate imagery will be somewhat lost on even the most dedicated of Pierre's minions. (The lack of booklet lyrics couldn't have been timed more poorly I might add). Thing is, "Disappear" is such a conniption to listen to, all the conjecture might just be worth it. The band charts a more linear course on the melody-friendly flow winding it's way through trademark Pierre confessionals like "Worker Bee" and "Her Words Destroyed My Planet." The fun really hits full-throttle mid-album on "Delirium," a tale of being tethered (or so it would seem) to a hospital bed in a mental health facility (or so it would also seem) where the patient is unable to differentiate if his meds or his surreal environment is responsible for said "delirium." In similar fashion, "Hysteria" also propels through the stratosphere like a searing firecracker, although the motif here is a little less psychotropic. It also happens to be the most keyboard-prominent cut on the disk. And yes, there's a ballad (of sorts) here, "Stand Too Close," but nowhere near as despondent as their last album's piano tearjerker, "The Conversation."

My Dinosaur Life is classic, utterly fun and off-the rails Motion City Soundtrack, and a more than logical successor to Even if it Kills Me. The latter part of that summation is bound to either delight or unnerve fans, that is, if Even if... was really viewed as that drastic of a departure (which in my opinion it wasn't). If twelve new MCS songs aren't enough to satiate your appetite, relax, because there's a very tricked out deluxe version of Dinosaur (pictured to your left) that you're about $60 in reach of, featuring the entire album laid out across six picture disk 7"s, all tucked away in an elaborate hard bound book. It also comes equipped with two CDs (one the album proper, the other an ep's worth of alternate takes and a bonus cut), and a signed lyric booklet.
Given the widespread availability of My Dinosaur Life, I am not at liberty to share any album content, per se, so I have assembled a brief three song selection of live versions of "Disappear," "A Lifeless Ordinary," and "Her Words Destroyed My Planet." These recordings are culled from a trio of December 2009 hometown concerts, where each gig was dedicated to one of their three previous Epitaph Records albums. If you need more convincing, Myspace is merely a click away. Finally, a word from our fine sponsor:
Posted by spavid at 7:22 PM

Vert cool. I'd never heard of these guys before. I just ordered their new album from Amazon. And, for all who are interested, just about their whole discography is available on Emusic.

I love these guys! :D I wasn't sure what to expect with this album but I truly love it like the rest of their stuff :)
I've never read your blog before but that is SO cool that all their other albums made your top 50! Would be the same in my books. Wish I could see them live though.