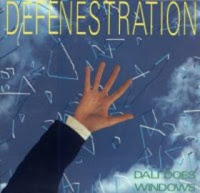 Remember the Chainsaw Kittens, that slightly off kilter '90s alterna-punk band from Oklahoma with the singer who dabbled in cross dressing? Sure you do. They gave a rather indifferent world some tremendously grand music, especially their first two albums, Violent Religion (1990) and Flipped Out in Singapore (1992). These were righteously heavy and melodic platters of the first order, but it turns out that leadman Tyson Meade was cranking out material equally as substantive and satisfying prior to the Kittens in an outfit called Defenestration. By virtue of the now defunct Feelin' Kinda Froggy blog, I present to you Defenestration's Dali Does Windows, which is noted as being their second and final release. Very much in the same vein as the Chainsaw Kittens, Dali... makes for a compelling precursor to Meade's slightly more renown outfit, albeit a tad less frenzied. Think a less self-absorbed Morrissey fronting Cheap Trick, with some occasional violin thrown in to keep things interesting. At the very least, a must hear for Chainsaw Kittens fans.

I had this on cassette back in the day would love to hear it again.

I went to high school with their drummer Whit Hyde, had the EP and saw them rwice in their early days. Great band gone too soon

Can you reup this please? Thanks!

Any chance you can refresh this? I can't find this album anywhere!

Someone posted a playlist on YouTube for this album last year. Here is the link.