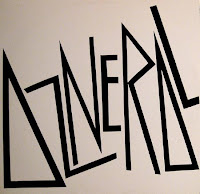 Before delving too far into this record, I owe a hearty thanks to my buddy A. who supplied all music files and artwork. Were it not for his generosity, this post would be as blank as a blind man's stare. The focal point of the curiously named Oznerol was Lorenzo Buhne, onetime bassist for The Dickies, and to my knowledge beer-breath punkers Fear as well. In more recent years, he's pursued a solo career. From what little I've been able to glean on Oznerol, this rather ingenious ep was a one-off affair. The four songs here don't particularly lend themselves to Buhne's punk pedigree, rather the kind of early-80s MTV wave/power pop that might receive airtime in the wee-hours of the morning. Buhne's passionate, yet somewhat high-pitched vocal timbre, coupled with light keyboard flourishes imbue "I Can't See Nothin'," and the even more winsome "I'm Waiting" with a fun, breezy fervor, without sacrificing one iota of integrity or songwriting aplomb. In short, this is pretty damn impressive. If anyone has any further info on this disk, or better yet, has an original copy they're willing to unload (though I don't understand why anyone in their right mind would) please get in touch.

Thanks. Was curious about this one. Actually it's Oznerol, Lorenzo written backwards.

Wow, thanks for pointing that out, Will update accordingly.

Thank you for the kind words.
If you send me your address, pretty sure I have an unopened vinyl copy somewhere.
Cheers
Lorenzo

Hey Lorenzo! Thanks for getting in touch. Glad you appreciate the post. Please drop me a line at: trusty73@roadrunner.com

hey, my name is Anthony Teti,,used to go by "tone" in the L.A. music scene in the late 70s ,early 80s. I performed on a song on "Oznerol" and recorded and performed with Lorenzo Buhne.A magnificent talent and accomplished bass player and songwriter,,I have some recordings..never released of songs sung in Italian by Lorenzo Buhne recorded by me. Please contact me at nonamealleyproductions@yahoo.com and please,PLEASE forward this to Lorenzo so we can connect again after 27 years...cheers, tone

I found this record in a thrift store in Lexington, KY around the year 1999, took a chance ($3) on it, and it's become an absolute favorite. So I have the vinyl, but no way of making it digital, and I acquired the MP3s somewhere, but the bit rate is terrible (160). I know you've re-upped this one several times over the years, but if the bit rate is higher than 160, may I ask that you re-up once more? Sorry.