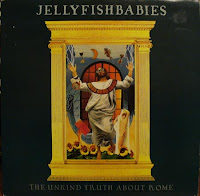 A couple weeks ago, I was listening to a podcast of the Rabid in the Kennel radio program, featuring none other than the band Sloan. Hosted by Jack Rabid of Big Takeover magazine renown, the discussion turned to Sloan's favorite modern rock bands from yesteryear. One named that popped up was the Jellyfishbabies (who's moniker I've also seen separated as two words, but for our purposes I'll go by the spelling adorning the album jacket). I had yanked a copy of their second album, The Unkind Truth About Rome from a Toronto record store bin not too long and decided to jog my memory as to what this long departed band hailing from the same city were all about.


Mouthpiece/axe-slinger Scott Kendall and his four cohorts were near-expert musicians, lending the Jellyfishbabies a certain amount of credibility that many of their wet-behind-the-ears contemporaries sorely lacked. The ten tracks that occupy ...Rome span a disparate gamut, with several forays into pensive ballads, vaguely reminiscent of Toad the Wet Sprocket, to blustry rockers like "Wild Cows" and the title track. The album satisfies the most however on such riff-endowed, happy mediums as "Girl in the Window" and "Alba." Evidently this was to be the 'Babies swan song. Dare I say this was also released CD?

I seem to remember this album getting released on CD, but not their self-titled debut (which was really good, comparable in sound to Husker Du). Either way, both albums are quite rare.

Will have to track that first album down. Thanks Roy.

Can this be reuploaded? Pretty please!

Also, their first album is available on their website Jellyfishbabies.com