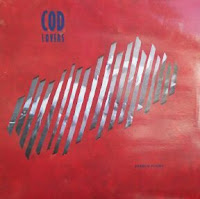 More long lost Swedish indie pop. I wasn't hip to Cod Lovers when this came out some twenty years ago, but listening to it today I wish I had been. There's nothing particularly seismic about French Plums, just loud, jangly rock sung in English with a discernible Scandinavian accent. Solid tunes, and quite the propulsive rhythm section too. Here's a portion of their bio, courtesy of Myspace:

The band formed in late –88 in Norrköping, a seaport city of Sweden, following a Christmas party gig at the Rockslottet, the leading local rock club at that time. The response was so overwhelming that the lads decided to go on with it. After a few more explosive gigs they soon gained the interest of their friend Ola Hermanson and his record label Ceilidh Productions. The single Best Friend was released, media coverage was soaring and the band played the Hultsfred festival in 1990. In the winter of that year, the album French Plums came out.

Cod Lovers parted ways in the mid-90s, but reunited for two gigs the next decade. There may be new music to come, plus a re-release of French Plums on iTunes, but until then you can listen to it here.

This is actually really cool! Thanks!!
terrsmithy@googlemail.com

Speaking of Swedes, do you have any Eggstone (besides "Somersault")?