This one is going to be a little offbeat for Wilfully Obscure, but here goes. Late last week I was immensely dismayed to learn that progressive talk titan Air America Radio had abruptly ceased live broadcasting and was filing for Chapter 7 bankruptcy. This immediately translated into a lot of things for yours truly, perhaps most notably the jettisoning of morning talk-show host and entertainer Lionel. No, not Lionel Richie, nor any sort of representative for the toy train company, just plain, eponymous Lionel (though his assumed moniker on Facebook is that of Lionel Lipshitz). As for his birth name, I'll let Wikipedia do the talking on that matter.

Hardly a dyed-in-the-wool liberal ideologue, our man is not reluctant to call both sides of the aisle into question – and 99% of the time he’s precisely on the mark. Quite simply, Lionel was a killer antidote to morning-drive shock jocks, possessing lacerating wit and humor, as well as a passionate and scholarly appreciation not merely for politics, but cinema, literature, health, and contemporary pop culture in general. Did I mention that he’s also a walking/talking, unabridged dictionary, who on a daily basis dispenses the kind of sophisticated vernacular that would make mincemeat out of any given word-of-the-day calendar? Solid gold. A true one in a million talent, and I certainly hope The Lionel Show resurfaces on the airwaves again in the near future. 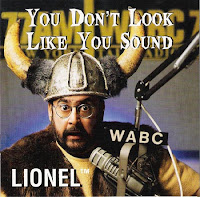 Prior to his 2007-10 tenure on Air America, Lionel initially launched his talk show in career in Tampa, FL, and by the mid-90s was lured to host his program on the more prestigious New York radio outlet, WABC 770 AM. Though I was altogether unaware of Lionel until he landed on Air America's doorstep, I soon learned that contemporary to his gig with WABC was his own comedy album of sorts, the 1996 issued, You Don't Look Like You Sound. As one might venture to guess, it contains several on-air sketches, but the meat and potatoes of the disk consists of his hilarious stand-up comedy routines (assumedly not a regular stint). A former trial lawyer, Lionel's experiences in the court room provided ample grist for stand-up material, and he delivered like a pro. Particularly amusing is his "disquisition" laying out the unlikely series of events that it would have taken to prove that O.J. Simpson was "framed" for the double homicides of his former wife, Nicole Brown Simpson, and her partner Ron Goldman. The album was a one-off project and is likely to remain as such.

More recently, Lionel published his first book, 2008's Everyone's Crazy Except You and Me...and I'm Not so Sure About You: America's Favorite Contrarian Cuts Loose. It's still available from all the usual suspects. Within the slim, 254 page chunk of tree pulp are no less than fifty concise, ADD-friendly rants and anecdotes ranging from the inherent Catch-22 of the First Amendment, to gin-mill (i.e. bar) etiquette, all strung together with Lionel's singular and uncanny strain of tongue and cheek common sense. Enjoy the album, and please investigate the supplied links. Lionel. One name, like "God."