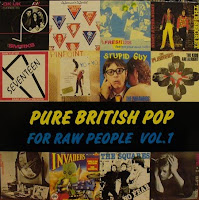 By the late '90s when I was still unearthing this thing of ours called "power pop" I had already acquainted myself with many of the basics - The Undertones, Nick Lowe, The Records, Rezillos, etc. Some more, dare I say "obscure" specimens from this late '70s/early '80s heyday were screaming to be added to my playlist. The problem was, I wasn't quite sure where to turn next. By the grace of the internet, I learned of these two vinyl-only compilations, right around the turn of the millennium, and boy what I treat I was in for.

Before going further, I should mention that these are technically bootlegs, with not even a fictional record label taking credit for them. Secondly, the packaging differs slightly with Vol. 1 specifying basic release info for each track, while Vol 2 is devoid of any song notes whatsoever. Ultimately, it's the music that matters, and for a homegrown release (assumedly culled from the original 7" singles handsomely depicted on the respective album sleeves), the audio quality is impeccable. Each of the two disks feature a cut from The Freshies, one of the best bands I can think of that I've neglected mentioning on this blog. Neither "Fasten Your Seatbelts" or "Johnny Radar" quite does them justice, but are alluring nonetheless. Sticking with Vol 1 for a moment, I was introduced to the bristling, second-wave era punk of Seventeen, featuring a pre-Alarm Mike Peters. I never quite followed up on some of the other gems I was enamored with on here, but The Squares, Pinpoint, and Strangeways were worth their weight in 45-karat gold as well. A Who cover by The Pleasers doesn't hurt either. 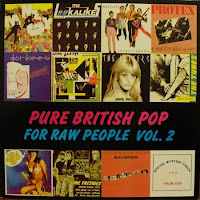 Onto the second volume. The standout track here is a no-brainer. The Letters' "Nobody Loves Me" is a riveting, jangle-inflected punk-pop stunner for the ages, wasting not one nanosecond of it's fleeting two+ minutes. If there's a better song that's been produced within this genre I have yet to hear it. Some of you might be familiar with the second participant in on this comp, The Dazzlers, who I featured here this past November. The Young Ones (not the clowns from the UK TV series of the same name), The Donkees, and the keyboard-enhanced Tunes offer some seriously winsome single sides as well. As for the "mystery track" that closes out side two, I'm inclined to let it remain just that. All in all, the little known Pure British Pop for Raw People compendiums are remarkably consistent and rewarding.

Wow! This is awesome. Thanks for posting.

Could you please reup this really interesting compilation?
Thank a lot, Riccardo