I suppose it was bound to return at some point. When I initially began the "Singles Going Single" series back in 2007, I intended to write up and post 100 singles within that year. I didn't quite eke the last of them out until early '08, at which point I concocted another series, this one dedicated to split 7"s called "Splitting the Difference." I was planning to bring retire that serial at the 50th entry, and thus far I'm only up to 35 or so. I may return to it at a later time, but since what I've offered thus far in the series hasn't exactly piqued your curiosity I thought I'd go back to something a little more enticing. Hopefully this second phase of "Series Going Single" will result in at least one 7" a week minimum, but I doubt I'll be closing it out before 2011. On to number 101. 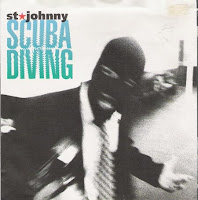 St. Johnny were a feedback-ish, somewhat dissonant, but tuneful indie rock quartet from New York, releasing some really hot 45's (conveniently compiled as the High as a Kite album for Caroline Records in 1993) before signing to Geffen for two albums, Speed is Dreaming in 1994, and Let It Come Down a year later. Speed is Dreaming, much like those early 7"s really lit a fire under me, but they retooled themselves in the mold of Beck to far less memorable impact on the followup. This single was released in tandem with the transitional Let It Come Down, and though the A-side doesn't always float my boat, the two flipsides are worth checking out. First comes a prolonged, albeit pleasant acoustic rendering of the Welcome Back Kotter theme of all things. It's followed up by St. Johhny's sleepy spin on the show tune standard, "My Funny Valentine." Incidentally, both of these b-sides are about four and a half minutes long apiece, but were somehow squeezed onto the same side of the single, yet play at 45 rpm - a feat I have yet to see repeated on any other 7" I've come across. Weird. I apologize in advance for some of the painful pops and snaps. Lot's more can be read about (and perhaps heard by) St. Johnny via Old Fart at Play blog.

A. Scuba Diving
B1. Welcome Back, Kotter
B2. My Funny Valentine

I'd always had these guys figured as a Connecticut band... they started out in Connecticut, at least.

they absolutely were a CT band. Moved to NYC very end of career. Jim Roberto of CT's- under represented and documented HED- joined St. Johnny for this single and Let It Come Down(Jim makes the record exciting in my book). St. Johnny were pretty awesome in the early New Haven area scene (Grasshopper of Mercury Rev played with them for a time when they had 3 guitar players).
great post.
Greg Vegas

is this record extremely warped?

Not warped at all, but as I mentioned nine minutes of music was crammed onto one side that plays at 45 rpm.

Thumbs up here for an excellent post Speed is dreaming got played quite a bit but never got played out 4 me. Fans of slacker rock can't miss out on this one.

saw these guys at a Lollapalooza in the late 90's. Speed Is Dreaming was definitely a favorite!