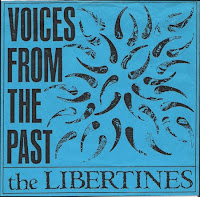 The Libertines (US) may have hailed from Cincinnati, but they conquered the...well, pretty much just Cincy to be honest. (Note, this is not the same Libertines that you heard about throughout the 90s-00s). In a more perfect universe, this quartet would be spoken of in the same breath as REM or the myriad of clangy left-of-the-dial acts that made modest mainstream inroads. "Jingle, jangle, crunch!" as the wise Jack Rabid once described them. Over the course of their original mid-to-late '80s lifespan the Libertines cranked out two albums and a couple of singles, the latter of which are where these two featured tracks are culled from. If the vinyl noise is a little too hard on your ears, you're in luck. Both numbers and nineteen other vintage cuts are available on the Libertines' Greatest Hits CD, which can be snatched up for a bargain over at CD Baby, and from what I understand iTunes as well. Well worth the investment. The Libertines played several reunion shows over the past four years, and are scheduled to make one more go of it in New York this July. Click the first link above for their Myspace page.

A. Voices From the Past
B. Something in the Water

A couple of years ago, I would have -- well I would have done something dramatic -- to get a listen to this single. Jack Rabid in his great mag The Big TakeOver was raving about these guys for years.

I finally tracked down the single. And then they reunited and Walt issued a compilation CD.

Thanks for promoting them. Both sides are astonishingly great.

sorry to disturb man but I saw you posted ART IN THE DARK by THE ICONS a year ago or sth...I' ve been looking for more than 15 years for one of their songs called "CHANGE". If you or any reader have it can you please send it to me...reply here or send an email (click my profile and you'll find it)...

Thanks for your comments Ace. Jack has always been a superb tastemaker.

As for the Icons, Pyke, sadly I do not have the song you are looking for. You can try searching for ir on GEMM: http://www.gemm.com

I was very fortunate to see the Libertines play 3 times during the 1980's. I remember every show, especially one.

The Libertines were playing at a small club on a scorching summer night. My friends & I were sitting right by the bass player. During a song break, one of my friends (drunk) made a snide comment. The bass player immediately turned around, gave me friend the finger & yelled out "F**K YOU, GUY!!"

I was mortified. I wanted to kill my friend! Later on, the bass player came up & apologized to my friend. I admired this bass player for his courage. But I stil wanted to slap my rude, drunk friend! Great band. Glad to see someone still remembers them.

It would be amazing if you could re-up this. Many thanks!

So great that you´re writing about The Libertines (US). Loving this band. The fire´s still burning.