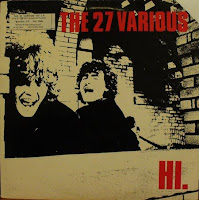 I had a request for The 27 Various a couple weeks ago. This isn't my first post on the band. I shared a 45 by them in 2008 in my Singles Going Single series. The brunt of their catalog (namely the albums: Approximately, Fine and Up) were released on Twin/Tone in the early '90s. Those records were a little too non-descript for my pallet, but subsequently I checked out their debut Hi and was pleasantly surprised. At this phase in their career, The 27 Various had a firm handle on contemporaries like Game Theory, and to a lesser extent the fabled "Paisley Underground" scene that was just starting to diminish upon the release of this album. My top two picks here are "Principal Percival" and "Colored World," the first tapping into the left of center stride the early dB's were so deftly skilled at, and the latter veering more toward crunchy, sublime power-pop bliss. There's some noticeable surface noise here, so should I come across a better copy of Hi, I will gladly repost it.

01. Principal Percival
02. Furry Creatures From the Forest
03. The Gormleys Will Miss Me
04. Tempermental Artist
05. Lamentations
06. Colored World
07. Venetian Blinds
08. Saturday Night and Sunday Morning
09. I'm in It
10. The Fish (Knows Why)

I might normally say thank you for the request but here I'm apt to say to everyone to just ignore those links on that first comment it's either spam or something worse no doubt...spooky
So you think that the latter output of the band on twin/tone not that good. I'm still interested in hearing those albums as the band sound goes from paisley to shoegazey.

the shoegazey debut by Polara (self-titled) is made of up of 27 Various leader Ed Ackerson with drums by Trip Shakespeare's Matt Wilson. It's a GEM.

I found this link via one of your Polara posts and I have to admit I'd never heard of 27 Various, but quite enjoyed listening to it- thanks!

Thanx 4 this. Fine is one of my all-time 90s favorites. I'd love to hear a couple of the other ones.