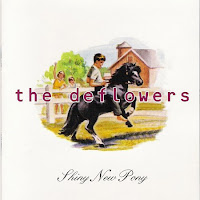 Seattle was more than kind to a clutch of raucous guitar bands during the early-to-mid '90s, but the Emerald City had no pity on the seemingly neglected Deflowers. Swampy, angst-addled grunge rawk wasn't quite their bag, but the quartet's riff-savvy crunch more than compensated for that soon to be played-out trend du jour. Shiny New Pony is a wellspring of unabashed power pop, frequently propelled by a punky fervor. The most accurate comparison I can conjure up is one of The Deflowers east-coast contemporaries, Lotion, but Husker Du wouldn't be off the mark either. This album was recorded and mixed by one Kurt Bloch, of Fastbacks fame and many other production credits. The Deflowers followed up Shiny New Pony with Fin, a comparatively tamer affair. If you enjoy this disk (and I think you will), please partake in my earlier Deflowers post for a bitchin' single they released in 1995.

Good stuff! You're right about Lotion (particularly the vocals). I also hear some indie rawk guitar bands, like Small, Lilys (circa Amazing Letdowns) and the Ropers. Thanks for posting!

Thanks for this (and the Demo that led me here.) "Scaffold" is my new favorite song.

Link has been fixed. Thanks for alerting us.