I was an early adopter of Spoon. When their debut, Telephono, landed on the music directors desk of the college radio station I DJ'd at, I was the intrepid soul to give it first crack, and wouldn't you know it, it was love at first listen. Over the course of a half-dozen albums, Britt Daniel & Co. gradually traded in much of Telephono's short, taut esoteric punchiness for suaver environs, and though they haven't lost me yet, the early stuff has yet to be parallelled with their 21st century catalogue. 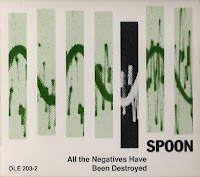 When Merge Records reissued Telephono and the hot-on-it's-heels Soft Effects ep in 2006 (both originally minted on Matador), no bonus material surfaced on the two disk package despite ample room to spare. Two no-brainers were the b-sides to the All the Negatives Had Been Destroyed CD-single, "Irrigation Man," and "If You Say So." True, this pair was not coveted as much as it's arresting a-side, or for that matter crucial album nuggets like "Nefarious" and "Don't Buy the Realistic," they should have at least been included as an incentive for the benefit of those buying these disks for a second time. 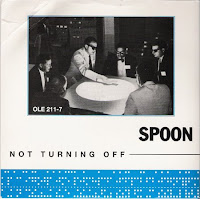 My very recent record store find of the UK-minted "Not Turning Off" 7" on Matador, apparently released in tandem with Telephono, included a non-lp b-side of it's own, a cover of a relatively obscure Prince album cut, "Partyup." To my dismay, my copy of the record was imbued with a very pronounced scratch populating the last ten seconds of the track. I was able to procure a cleaner rip of the song online for this upload. In any event, it's barely a keeper (likely ditto for Prince's original incarnation) but like the aforementioned, it would have made for a suitable Telephono bonus track as well, if only for historical significance. 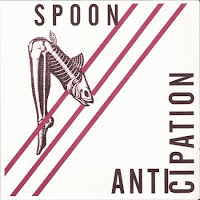 The last two selections here were issued on an exclusive, one-off 7" single for the Canadian Mag Wheel Records label. "Anticipation" is Spoon gold - a lean, bare bones rocker that sports one of the sharpest hooks from these Austin denizens to date. The single was reissued a few years ago, and original copies may still be purchased (that's right kids, time to break out the wallet) via mailorder from the label itself. Britt did the sleeve on this too. What a guy.
01. Irrigation Man
02. If You Say So
03. Partyup
04. Anticipation
05. Headz
https://www72.zippyshare.com/v/q4wDh53j/file.html
Posted by spavid at 5:26 PM

Thanks! I've been a fan of Spoon since "Gimme Fiction," and I've been catching up on their earlier stuff ever since.

would you please re-up this one as well? thanks