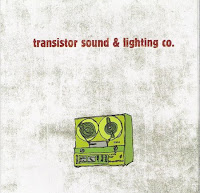 Nothing succeeds like success, and boy, were Winnipeg, Manitoba's Transistor Sound & Lighting Co a smash hit! Not quite actually. Living close to the Canadian border lent itself to hearing certain Toronto radio stations with relatively good reception. I was acquainted with the Transistors on CBC Radio 2 during a Saturday, mid-evening pizza delivery run. This must have been in 1998, just as the halcyon era of '90s indie-rock was about to fade into it's inevitable twilight.


The hushed ramblings of, "flangability, fuzzed overtone, sunny lake music" that prefaces the opening "Coffee Song," deliberately or not, sums up the motif of this album quite accurately. TS&L embraced fidelity in all of it's flavors - lo, mid, high - often indulging in all three within the span of a single, two minute song. And I must say, this trio championed an unwieldy sense of dynamics, so much so that this album is frequently the aural equivalent to a Jack-in-the-box. These fluctuations however, thankfully did nothing to stifle the songs themselves, which were not necessarily infectious, but memorable nonetheless, as evidenced by my personal faves, "Anyways/Mayonnaise," and "Prince Vince." As for comparisons, TS&L presumably imbibed the recorded output of such illustrious Great White North outfits as, Eric's Trip, The Papillomas, and early Sloan. I'm not sure why or exactly when the band derailed, but this was to be their only album. You can read some more thoughts on the TS&L here.
01. Coffee Song
02. Crayola
03. Prince Vince
04. Sasparilla
05. The Blanket (Gives You Zen)
06. Anyways/Mayonnaise
07. Planet Sweetness
08. House of Sleep
09. Good Egg
10. Three Chords
11. Elegy for Peaches
12. The Trampoline Delay
13. Fly the Trike, a Faster Bike
14. Jaded & Elated
15. Proletariat Rant
16. Fade Away
http://www4.zippyshare.com/v/91931116/file.html
Posted by spavid at 5:03 PM

Jay Churko performs in the Chords of Canada (and a few other bands while helping to run one of Winnipeg's best music stores (Music Trader).

He also participated as a part of this fascinating Winnipeg music experiment.

I saw the Papillomas many times, bought the t-shirt but sadly never an album. TS&LCo. is still one of my favorites and has no foreseeable expiration date.

Would love a repost of this album. I remember it from my high school days and would like a listen. I own the CD, but can't find it at my parents' place anymore.