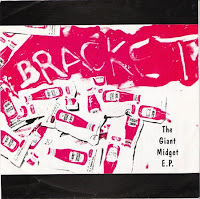 It took me a good five years or so to find this record, and I haven't seen it before or since. The Giant Midget 7" by Forestville, CA denizens Bracket, was their premier effort, and a highly effective demonstration of their "melodicore" prowess, beating nearby homeboys Green Day at their own pop-punkin' game. Problem was, even though they had major label distribution, the much needed push of touring and promotion was sorely lacking. That aside, their addictive melodies and savvy three-chord fret-runs were nothing short of stupendous, particularly on their bitchin' early albums, 924 Forestville St. (1994) and 4-Wheel Vibe (1995).


The takes of "Why Should Eye," and "Missing Link," here may or may not be same as the versions on 924 Forestville. They're pretty identical, but the liners don't provide a definitive answer. The highlight here is actually "Imaginary Friend," which never saw release on a Bracket album, but instead, was included on the Shreds Vol. 1 compilation on Shredder Records. My long elusive copy of Giant Midget is inordinately static-y, so if this made a good impression on you, I'm sure you can locate the aforementioned albums, not to mention many more Bracket offerings, online cheap.
01. Why Should Eye
02. Skanky Love Song
03. Missing Link
04. Imaginary Friend

Update:  The Bracket crew are in the midst of digitizing a slew of rare and unreleased material, and making it available on Bandcamp via a three part series of compilations.  Just posted earlier this month, Rare Cuts Vol. 1 features "Imaginary Friend," and other songs from Giant Midget are likely to follow on installments 2 & 3.  Proceeds from all sales will go to fund a new album, so do your part and show Bracket some love!
Posted by spavid at 5:33 PM