The Cucumbers - Who Betrays Me...and Other Happier Songs (1985, Fake Doom) 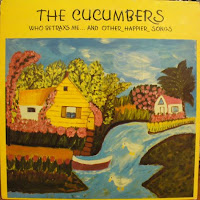 Like the afore-discussed Individuals, The Cucumbers operated in/around Hoboken, NJ, but were dwarfed by such hometown heavy-hitters as The Feelies, and a little later on, Yo La Tengo. An intermittent, but nevertheless long-running, coed outfit who have released records as recently as 2004's All Things to You, The Cucumbers beginnings date back to the early '80s. Who Betrays Me, issued on Fake Doom Records, was their debut full-length, preceded by a debut ep, Fresh Cucumbers two years earlier. Falling squarely between The B-52s and Let's Active, I surmise the Cukes were a sizable success on college radio - enough so to garner a deal with a very big indie at the time, Profile Records. A self-titled sophomore effort came out in 1987, and at the time I recall seeing a video from it on the USA Network in between b-movies, or something like that. Some critics suggested they lost their edge, but opinions aside, the album bombed commercially, and they were evidently dropped like a bad habit.


I was intrigued enough to take a chance on this album when I saw it at a used record dispensary last year. Not a desert island item, at least to my eardrums, but I'm sure I'll find a few takers here. Enjoy. You can also check out some Myspace action here, and edjumicate yourself about their entire discography, courtesy of Trouser Press.
01. Who Betrays Me
02. Walking and Talking
03. Everything Goes
04. Love
05. Want to Talk
06. Susie's Breakdown
07. D-Zep
08. Desperation
09. Feels Good
10. You're Still Here in My Arms
11. Don't Watch TV

hello wilfully obscure. would you be interested in posting a new record from a austin, tx. band? if so, i can send you a link.

Holy smoke I totally forgot about these guys...I remember they had a "big" hit in the early eighties with "My Boyfriend" and that it was a guilty pleasure of this punk rocker...Thanks!
--Peter

i'd love to hear this again, but as ususal, the media player won't recognize the file. can someone please explain how that works or what exactly is it that i'm doing wrong.

haha! i finally got a goddamned file extractor! could somebody have possibly told my stupid ass about those effing things? goddammit.

Hello! Long time follower, love your blog! Any chance of a re-up on this one? Can't find it anywhere else. Thanks for all you do!

Thanks a lot for this album, but unfortunately the link is no longer available, please, could you upload it again?