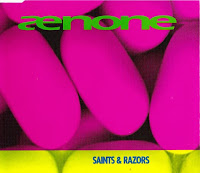 Aenone were a downstate New York act from the early-90s, who embraced the Shoegazer movement with what appears to have been every fiber of their collective being. Glistening chords, flange, fuzz, and Craig Sterns generally hushed vocals dominated their meager recordings. Sublime. Delectable. All that good stuff.


Though they were archetypal of the genre, Aenone devoured what was going on across the pond (Lush, Chapterhouse, et al) but also gave a wink and a nod to home turf dream-poppers, Fudge and The Drop Nineteens.


This post encompasses two eps - Saints and Razors, released on Kokopop Records fifteen years ago, and an earlier work, the six-cut Red ep, the latter of which I have no physical evidence to prove it was ever commercially released. After Saints and Razors, Aenone were forced to change their moniker, settling on Nyack, their hometown. Nyack released a couple of eps under their own name, and an LP, 11 Track Player. Much can be read on Aenone and Nyack on their respective Myspace destinations, hyperlinked above. Aenone have reunited and are reportedly preparing an album.

Get both eps here: https://www101.zippyshare.com/v/ByH1ojDU/file.html
Posted by spavid at 6:13 PM

Thanks Neil for posting both ep's from Aenone!I thought their only put 1 ep's before transforms to Nyack.Btw,I'm still looking for Nyack stuff!!Thanks again for this!

Hi I run the Nyack myspace, didn't even know about the Red EP but I'm very thankful that you posted it! So it seems a lot of the Nyack tracks were pretty old when they were properly released. Also you might be interested that Craig is digitalising the Savage Smile and I'm You Star videos so should be on youtube at some point.

Wow, I'm amazed you got your hands on this very rare demo. It was not an actual EP, but that last set of demos I had done before we got signed to Echo. I had been making 5-6 song demo tapes for years that I would share with friends and later some people in the business, but believe me, it was only a handful of folks. Where ever did you acquire this?! I'm quite flattered you would even go through the trouble of digitizing it, so I thank you for that. I didn't even have them in digital form until now!Ahh the R8 drum machine. Wish I still had it tho I do have all the sound banks saved and could still use (not that I would...). Yes, I am writing new aenone material, but it's going very slowly as I'm writing a new nuevos album at the same time. It does suit my dual, gemini personality, but songs may not see the light of day until next year. Thanks again for your interest in my work, it means a lot to me.

Could you possibly reupload this?
Thanks in advance!

could you reupdate this please? thanks!