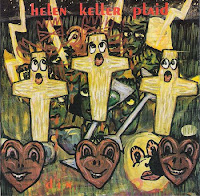 Helen Keller Plaid may have emerged from Sacramento, CA, but they brandished a swagger and spirit akin to Midwest contemporaries Soul Asylum and the Magnolias. Their debut album, Din, exudes a taught balance between grit and melodicism, though a cover of David Essex' "Rock On," strikes me as a tad random. Even though major changes in the "modern rock" strata would soon be afoot after the release of this album, HKP were still wholly representative of the college-rock underground of their era. Very little is to be unearthed about this quartet on the web, including the origins of their offbeat name, but a second album, One Swell Foop, was released in 1991.

I totally missed this one back in the day. The early Soul Asylum / Magnolias comparison is spot on. Thanks!

I'm a long-time fan of Helen Keller Plaid. In fact, the lead singer and songwriter was the best man at my wedding. We enjoyed seeing this - and I'm personally very thankful that you ripped Din - I own a few copies but I downloaded it anyway!

The name comes from a line in the Scorsese film, King of Comedy.

man, i LOVE this album!! i have a later LP, but this one skipped my radar, now i must hunt down a vinyl copy, thanx to YOU!!
cheers for a bloggy new years!!

take a look at http://www.helenkellerplaid.com/

where the origin of the name is explained. (Fun Facts)
And where THIS blog is mentioned!
(HKP on the web)

thanks you nice blog music https://acsesi.com/muzikdinle

I'm listening to DIN right now for the... millionth time since I first saw these dudes at Marsuggi's in San Jose in the mid 80's and fell in love. It's 2018 now, and the songs are as brilliant and as powerful as they were the day they were recorded. And the thing about this band that most of you will never know: The recorded music - as fantastic as it is - it is hundreds of levels lower than how hot this shit was when HKP played live! Dudes were insanely groovy. Just fucking awe inspiring. Groovy!

Listen to the songs and separate out the individual musicians in your head: The singer/rhythm guitarist is a fucking monster genius. His brother is another fucking monster genius playing drums with a style you've never heard, along with writing. The bass player is a monster fucking genius, and the lead guitarist is a MONSTER FUCKING GENIUS. Goddamn, but they put on a show, and then hauled all the shit home and went to work the next day.

So they exist as this crazy badass old band that not so many people are aware of, except you. That's a beautiful thing, that you can google their name in 2018 and find them. The songs are that good - and maybe in 2118, the same will apply?

DIN is played out, and I'm now listening to "simple kiss" by Eleven. Another band that should have become at least as big as The Monkees... but again, maybe best for all involved that they didn't. If the rent gets paid, isn't that the only thing that really matters?