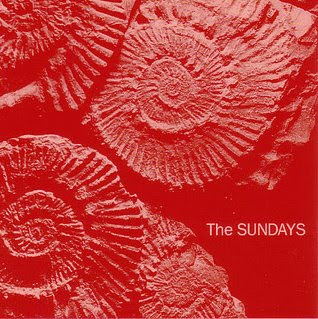 The trouble with having a "favorite" album is that it may not stay your favorite after excessive listens. I've had friends tell me that they shelve their desert island disks, and try not to listen to them in any great frequency, or at best moderation in an attempt to ward off any impending immunity to the pleasure they derive from them. This theory is fully logical, but it's a lot easier to follow when the artists of those said desert island disks are still issuing new material. That's not the case with The Sundays, who in fact have not recorded an album since 1997's Static and Silence. In fact, that album may never be followed up, unless that is, the band's opted to take a page from Axl Rose...but who am I kidding.


It's almost shameful for me to suggest the Sundays peaked on their debut, Reading, Writing and Arithmetic, circa 1989, but song for song, this album is a delicate tour-de-force of Morrissey-ian, self-deprecating ruminations emanating from the mouth of one Harriet Wheeler amidst dreamily chiming guitars and a subtle rhythm section. It's been an inseparable part of my life for some eighteen years now, and although two follow-up albums have followed in it's wake, I'm virtually gasping for more.
Regarding what I explained in the first paragraph, about two years ago it dawned on me that I had in my possession all ten tracks from Arithmetic in either live, radio session, or demo incarnations. Naturally that realization was the germ that possessed me to slavishly cobble together an "alternate" Arithmetic, that I could substitute the proper album with, minimizing the immunity I've have feared for almost as long as this album came into existence.
The two demos, "Can't Be Sure," and "You're Not The Only One I Know," were b-sides to part two of the 1997 "Summertime" import cd-single. I'd love to hear more where they came from, but unless a deluxe reissue of Arithmetic is impending, I suspect not. The stunning Peel Session take of "Skin & Bones" is more transfixing than the album version. The three cuts culled from the Netherlands March 1990 show, appear to originate from a soundboard recording - almost unheard of for collectors Sundays live shows. "A Certain Someone" performed live on the Blind tour in 1993 was taken from a bootleg CD, likely derived from a decent, if a little bass heavy audience recording. Finally, a couple of representative cuts from the Sunday's Black Session, recorded in France 1992 round out a thoughtful recreation of an album that I hope to never tire of. Hope you like it.

Hi, nice post on a truly great band and album. Just to point out that the 2 demos are from CD1 of Cry and not CD2 of Summertime (unless of course both share the same B-sides - I only have the former). Also, do you mind sharing all of the Peel and Black Sessions? Sadly Rapidshare doesn't seem to work for me. How about using Mediafire?

Hi,
I actually was at that concert in The Hague - nice to hear some of it again.
When the second album by The Sundays was released, they gave an interview to Belgian magazine Humo: they mentioned that their records were also released in Japan, and their Japanese record company had some problems with the title of their first album (I guess the three R's were too complicated).
So they thought since the second album was simply called 'Blind', there wouldn't be any problems - and then their Japanese manager showed them, proudly, the poster they had made- for 'Brind'...

Thanks for the kind words folks. I'll try to accommodate your requests in the near future.

Attending the Hague show must have been a treat. I only had the opportunity to see them on the Static and Silence tour.

Just FYI everyone, PVAc to 44.1 kHz blog has uploaded the complete Sundays Black Sessions, along with all three albums:
http://digivinyltal.blogspot.com/2008/09/sundays-reading-writing-arithmetic-1990.html

wow! thanks this is a rare treat.The Sundays have always moved me greatly.
I have added this great blog to the links on my Paddy McAloon/Prefab Sprout Blog.I hope you don't mind.Keep up the good work,Best Wishes. Rock
http://tincanpot.blogspot.com/

Outstanding post! Thanks, thanks and thanks again!
And don’t worry THE ALBUM will never tire, The Sundays forever!

Angel Harriet, where are you?:(

hi do you have this in lossless ??

really appriciate it if you could help me out

my list is here let me know if theres anything you want .. http://jimod72.wixsite.com/liveboots