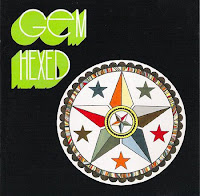 Before he hooked up with Robert Pollard in Guided By Voices, mach bazillion, come 1997 for the Mag Earwig album, Gem leadman Doug Gillard made a name for himself in Ohio's indie rock circuit during the '80s in Death of Samantha and later, Cobra Verde. It wasn't until the mid-90s when he and another future GBV alumni, Tim Tobias, really blew the doors off their collective hinges as a wizardly songsmith in Gem, on par with the ultra-prolific Pollard himself.


Gem's 1995 debut album, Hexed, is chockablock with slightly ironic, guitar-heavy power pop that's as robust and melodic as you could possibly yearn for. The breezy "Suburban Girl," and the foot-stomping "Your Heroes Hate You," get my jollies off, but Trouser Press puts it this way:


Hexed is a tuneful rush of smart, catchy and simple rhythm guitar pop-rock — sort of grown-up Weezer without the anxious pretensions. Although contributions from the others aren't as crafty, main songwriter Gillard comes across with the woolly and weird chant of "Sheep," the bracing T. Rex borrowings of "Your Heroes Hate You" and the countryfied pun of "Only a Loan."


I don't have an exact release date for Gem's I Am a Tree vinyl 12" ep, but it was recorded between 1993-96. The title track was usurped by Robert Pollard for the Mag Earwig album, but listening to Gillard's original execution of the song is fascinating and rewarding. The record's second strongest moment, "So Good to See You" (not the Cheap trick song, but almost as satisfying) eventually wound up on the second Gem album, Sunglare Serenades.
Hexed
01.Sheep
02. Your Heroes Hate You
03. Only a Loan
04. Failed to See
05. Suburban Girl
06. Little Star
07. I Hate It
08. Any Trepidation
09. Like This
10. Many Moons Break
11. Yeahya
12. 2 Me Now
I Am a Tree ep
01. I Am a Tree
02. Good To See You
03. A Requiem
04. When They Pull You Out
05. Amnesia

Thanks for these. I have that 12" but never picked up either LP. "Suburban Home?" You've got Descendents on your brain I'd say.

I don't supposed you have the means to rip the B-sides for the Sheep (Smiling All the While) and Suburban Girl (Drool) singles? Two of Gem's best songs, never released in 1s and 0s as far as I know.

uh-oh, i cannot expand the ep using a Mac. i tried RAR Expander, Stuffit, and unRAR. every one tells me it's hung up on the "I Am a Tree" file.

Yeah, guess I was in a subconcious Descendents mode. Damn. Actually, I have the two singles. I think "Drool" is just an instrumental, but I'll see about getting them up.

As for the mac issue, not much I can recommend. Would uploading the file to say, Sharebee be helpful?

i download RAR files from various upload services all the time without any problems, so i don't know whether the upload service is the problem or if the file was already corrupted before you uploaded it. it probably wouldn't hurt if you created a new RAR or ZIP archive, too. but whatever you feel like doing is fine by me. i get what i pay for :)

Once again, our record collections cross. I like this record a lot, their 2nd one not as much (though it gets better after the first few songs).

And "I Am a Tree" is probably my favorite GBV recording, though I've only heard the original once or twice (I think it's up on Doug Gillard's MySpace now, along with a brand new song which is really really good).

Thank you for this! Been looking for this for a while. Do you have any of his work from his first band, Death of Samantha?

I was planning to put some Death of Samantha up on my blog this weekend - panzanblog.blogspot.com.

In the meantime you can find one LP on this blog:
http://feelinkindafroggy.blogspot.com/2008/09/death-of-samantha-where-women-wear.html

I'm with you Brushback about the second Gem album. Kind of a disappointemnt.

Forgor to mention in my post that Doug Gillard has some slammin' new tunes up on his Myspace page.

Hey there - I was quite surprised to see this posted here - I used to be in Gem for a few years, and play bass on most of the songs on Hexed (and sing "Little Star" on there..). A nice surprise too, I must say. It's good to see all the nice comments on the music as well!

Definitely look for the Death of Samantha stuff too, they were one of the best Cleveland bands going when they were together!

And yes, Drool was an instrumental. And Sheep really was a great song!

The I Am a Tree EP came out in June 1997, right around the same time as Mag Earwhig.

Thanks for the re-ups!!!
GREAT!!!
Do you have " Sunglare Serenades"?

Would you mind re-uploading Hexed? Thanks!

Also, you reviewed "Godwatching" by Private Plain in 2009, and I just wanted to let you know that they're still around as Blue Factory today.

Could you re-upload I Am a Tree pleaseeeeeeee :0)

Could you re-upload I Am a Tree pleaseeeeeeee :0)

Would love some reups of this! Gem ruled.