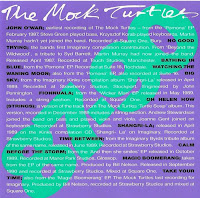 In my opinion, Manchester, England's Mock Turtles were at their creative zenith on their 199o debut album, Turtle Soup, but some of the singles that preceded it were album worthy to boot. The Turtles explored their psych-revival tendencies, but were wise enough not to hem themselves to the "Madchester" movement, nor were they overly derivative of any particular '60s originator that happened to grace their turntable.


Many of the covers compiled on this 1991 singles collection are telling - "No Good Trying (Syd Barrett); "Big Sky" & "Shangri-La" (Kinks) and "Time Between" (The Byrds). While these remakes outdo many Mock Turtles originals, 87-90 delivers it's share of band-composed keepers. A strings-enhanced version of Turtle Soup's "Oh Helen How" is utterly sublime, "Calm Before the Storm" references C86 jangle, and "Magic Boomerang" is pop bliss, not to mention representative of the best of what the Mock Turtles-era had going for it.
01. John O'war
02. No Good Trying
03. Bathing In Blue
04. Watching the Waning Moon
05. Big Sky
06. Fionnuala
07. Oh Helen How (strings vers)
08. Shangri-La
09. Time Between
10. Calm Before the Storm
11. Magic Boomerang
12. Take Your Time
https://www86.zippyshare.com/v/BoDlrm2Y/file.html
Posted by spavid at 9:29 AM

Thank you! Been wanting to hear this stuff for years.

I love this blog, is really amazing. The turtles are my favorite animal because they are quiet and they never represent a danger for anybody. This is the main reason why i love it.
buy viagra

Any chance of a re-up on this? It would be very appreciated! Thank you!!

looking for this one for ages ! any chance of a new link please??