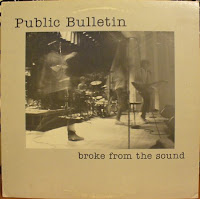 Nada background info on this one. What can I say, I bought it in admiration for the sleeve. The back cover divulges little liner info, except for denoting Broke From the Sound, was recorded in Austin, TX, and the band appeared to be based in San Marcos, TX, not far from the state capitol. Public Bulletin, who boasted a six-man roster, very likely may have been contemporaries to such Austin-situated, period acts as The Reivers, True Believers, and The Texas Instruments. What you get is four tracks of modern indie-rock fare, negligibly reminiscent of REM. The harmonica's that lead off "Victim," and "Green" are about as "Western" as the vibe gets. My pick here is "Killing Us," enhanced by washes of keyboards and poignantly ringing guitars. Enjoy.

Rob Thomas, the screenwriter and author who created Veronica Mars, played guitar and/or bass for Public Bulletin, which later morphed into Hey Zeus.

Thanks Dave. Did Hey Zeus record anything?

Yes, I know they had an album called "Call Your Mom" but I've just found Rob Thomas' website http://www.slaverats.com/ -- the Music section has a full discography and 25 mp3 downloads including Public Bulletin, Hey Zeus and Black Irish. Nice! Also look under "career highlights" in the Personal Info section.

Thanks again dave. Had no idea this site existed. Very cool!

San Marcos was a great place to be in the 1980s and early 1990s - I went to (the University formerly known as Southwest) Texas state from 1987 to 1991, and I remember the music there - Public Bulletin aka Hey Zeus aka Black Irish, Second Glance, and Skull Duggery. Sundance records just shut down in April of this year - the end of an era.